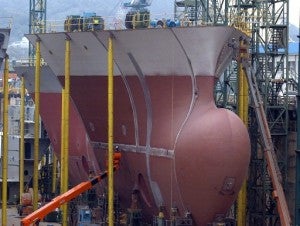 This file photo shows a ship being being built at Hyundai Heavy Industries shipyard in Ulsan. The South Korean shipbuilder said Sunday, Jan. 20, 2013, it has won a $1.1-billion order from Norway’s Statoil ASA to install a topside facility on a spar hull. AFP PHOTO/ FILES/KIM JAE-HWAN

SEOUL—Hyundai Heavy Industries said Sunday it has won a $1.1-billion order from Norway’s Statoil ASA to install a topside facility on a spar hull being built by the South Korean company.

The world’s top shipbuilder by orders said it would build the 21,000-ton topside facility, capable of producing 23 million cubic meters of oil and gas a day, by March 2016.

Hyundai has already won an $800-million order from Statoil to build the spar hull some 300 kilometers (186 miles) off the northwest coast of Norway.

The company said the cylindrical, partially submerged offshore facility will be able to store 160,000 barrels of gas condensate when it is completed in the second half of 2015.