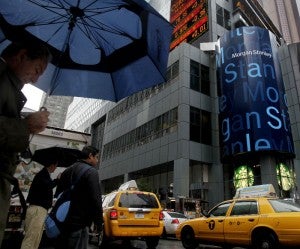 NEW YORK— Profits roared back at the investment bank Morgan Stanley in the fourth quarter, reversing a loss in the same period a year ago, when its results were weighed down by a costly legal settlement.

Earnings increased sharply across the bank’s business lines, and its stock jumped. Morgan Stanley’s investment bank underwrote more stock and bond offerings and brought in more fees from advising companies on mergers and other deals. Financial advisers in the wealth management unit, who work with individual investors, generated more revenue per worker.

The bank is transforming itself to adapt to a post-financial crisis world. Like other investment banks, Morgan Stanley has traditionally focused on doing business with companies, governments and other big organizations. But the bank is adapting its strategy ahead of new regulations, which are eliminating some of the practices that the bank used to rely on for revenue, such as trading for its own profit.

So Morgan Stanley is expanding its work with individual investors, which can provide a steady source of revenue even when financial markets are volatile. A big part of that plan is the retail brokerage, Morgan Stanley Smith Barney, which it jointly owns with Citigroup. Morgan Stanley is in the process of buying out Citi’s remaining 35 percent stake, and said it plans to do so by the end of this year.

In an interview, Chief Financial Officer Ruth Porat said that although many of the new regulations that will govern the banking industry haven’t been finalized, their direction is clear and the bank wants to be ready for them.

“We have evolved our business model to be aligned with where we think growth is,” Porat said. “Our approach has been, ‘Hey, regulation is very important. Let’s make the investment and be patient and not wait to see where it’s headed.'”

Morgan Stanley executives have also pushed for changing the way that bankers are paid, a topic that has been a flashpoint since the financial crisis. Porat said that bonuses this year for the bank’s highest-paid workers, roughly the top 20 percent, will be deferred. That means they’ll be paid in installments over three years, rather than in an upfront lump sum. The deferrals apply to employees who make more than $350,000 and a bonus of more than $50,000.

Corporate governance experts and shareholder activists tend to favor this type of pay structure, saying that the longer-term payout encourages bankers not to take unreasonable risks. Porat said it helps tie the bank’s interests to that of its shareholders.

CEO James Gorman said in a statement that the bank had “reached a pivot point” after a challenging year. That included being criticized for its handling of Facebook’s glitch-plagued stock market debut, and getting its credit rating cut by the ratings agency Moody’s. Gorman said the bank is now “poised to reach the returns of which it is capable” for shareholders.

The fourth quarter was dominated by worried about the “fiscal cliff,” a package of automatic tax increases and government spending cuts that would have taken effect if lawmakers in Washington hadn’t hammered out a last-minute budget agreement. As the cliff approached, unnerving many investors, Gorman encouraged employees to contact their members of Congress and urge them to reach an agreement.

Porat said Friday that the response had been overwhelming, and she calculated that it had reached almost all members of Congress. “We heard from so many clients who said, ‘We’d like this to be resolved,'” she said.

The bank is still under pressure to cut jobs and expenses as a way to boost earnings. Over the year, it shed nearly 4,500 jobs, or 7 percent of its workforce. Bank of America, Citigroup, Goldman Sachs and JPMorgan Chase also trimmed jobs over the year.

For the quarter, Morgan Stanley earned $867 million after stripping out an accounting charge related to changes in the value of the bank’s own debt. That compares with a loss of $374 million in the same period a year ago.

The loss last year was related to a settlement Morgan Stanley made with the financial insurance company MBIA, which had accused the bank of misleading it about the quality of certain securities for which it bought insurance.

On a per-share basis, Morgan Stanley’s earnings were equivalent to 45 cents, versus a loss of 20 cents per share a year ago. Revenue jumped 37 percent, to $7.5 billion from $5.5 billion.