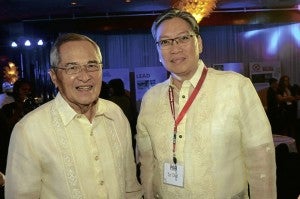 Cesar A. Buenaventura has more prestigious awards than most executives now manning the helm of the country’s largest corporations.

And the list goes on, much to the envy of other executives.

But the title that evokes a real sense of fulfillment for Buenvantura is founding chair of the Pilipinas Shell Foundation Inc., the social development arm of the Shell companies in the Philippines that just celebrated its 30th year of responding to the country’s development needs.

The 83-year-old, who still packs a full schedule, including a round of golf three times a week, says that seeing how far the foundation has gone and still being involved in its operations give him more than enough reason to keep on going, instead of just staying home.

“Shell is in my blood,” declares Buenaventura, who started his career at Shell in 1956, rising to become its first Filipino CEO and chair in 1975. He held the position until he retired in 1990. He stayed on as non-executive chair until 1992, but remains a director of Pilipinas Shell Petroleum Corp.

According to Buenaventura, the foundation was born in 1982 out of a dire need of Filipino corporations for skilled workers.

“There was a kind of a paradox at that time. There were a lot of people graduating, but there were no jobs waiting for them. There were dropouts with no skills and could not find employment,” says Buenaventura, “But on the other hand, companies badly needed skilled workers. So, we said, why not put up a foundation to address our needs?”

“We worked out a curriculum to teach out-of-school youth and help them become welders, mechanics, tinsmiths, electricians, among others. We also had values formation so that, not only did they learn the skills, they also developed the right attitude,” says Buenaventura, who has five children, including one who is making a name in the furniture sector.

The SKIL program remains one of the banner programs of the foundation. In a span of over 30 years, Buenaventura says, over 6,000 young Filipinos have received skills training. Some have gone on to work for large companies here while a good number have gone abroad.

“Some have become plant managers because we did develop some very good people. There were a lot of applicants, but we really selected those with the right attitude and great potential. I am happy that the program is still there and remains relevant,” says the Civil Engineering graduate. 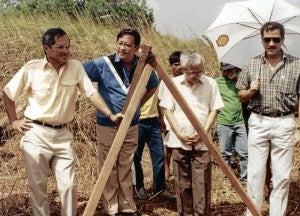 BUENAVENTURA, the first Filipino CEO of the Shell group in the Philippines, was always around for the foundation’s projects.

“During our travels we saw that there were a lot of unproductive farms with very low yields, so we developed a program on agriculture. It was not directly related to Shell, but I felt that there were two things that needed to be done: The young had to be trained for something since not everyone can be absorbed in white collar jobs, and agriculture had to be developed,” explains Buenaventura, who was made Honorary Officer of the Order of the British Empire in 1991 by Queen Elizabeth II.

That method of employing business skills and techniques to solve social problems will be the subject of succeeding projects of the foundation over the next 30 years.

Buenaventura says the desire to improve the implementation of existing programs and the search for the next big initiative keep him fired up and ready to go every day, even as he already has his hands full as managing partner of the Buenaventura Echauz and Partners Financial Services.

“I am still very much interested in doing a lot of things. Eventually I will get to smell the roses. But maybe I am already a little late for that,” says Buenaventura.