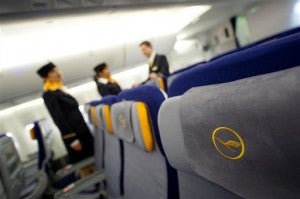 Lufthansa cabin personnel work in a Boeing 747-8 plane at the airport in Frankfurt. Lufthansa/Swiss Airlines, together with other foreign carriers, supports the removal of the so-called gross Philippine billings tax (GPBT) and the common carriers’ tax (CCT). AP PHOTO

Clemente said these airlines have expressed interest in flying to the Philippines starting early next year once the law abolishing such charges has been enacted.

“The President has issued a certificate of urgency so our legislators only need to reconcile the Senate and House (of Representatives) bills on the removal of these charges. When the charges are removed and given that demand for flights grow, that would give international carriers the incentive to open or add flights to the Philippines,” she said.

Clemente said that, hopefully, the airlines can add more flights by mid-2013 if the taxes have been removed by then.

“We have seen the dwindling number of seats available to the Philippines because of the GPBT and CCT and this is not good since different parts of the country are largely only reachable by air,” Cabalza said. Various local and foreign groups, including the Board of Airline Representatives, have been clamoring for the removal of such levies.

To meet the target, 15 million seats should be made available, according to data released by the Senate. Currently, the Philippines only has six million seats available with about 369 flights weekly, the second-lowest in Asia and just ahead of Cambodia.

The Philippines is the only country that levies taxes on airlines, the PTAA and FTIP said earlier in a statement.

Expected jobs to be created are currently seen at six million with revenues to be generated estimated to reach P455 billion by 2016.

The Congress has long passed its version of the bill removing the GPBT and CCT. Last week, the Senate unanimously voted for the passage of a Malacañang-backed bill conditionally waiving the P2.5 billion combined revenues from the GPBT and CCT. The Senate version exempts foreign carriers whose countries likewise give a similar tax exemption to Philippine carriers.

This early, Cabalza said, all tourism-related subsectors should start preparing for the entry of more foreign tourists to the country.

“We have to find the right balance in terms of supply of hotels, seats, pricing, and airport capacity. More training must also be provided to travel agencies and tour operators. Our tour guides should also become multilingual,” Cabalza said.