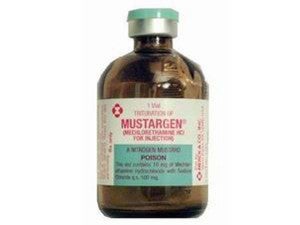 A bottle of mechlorethamine under the brand name Mustargen. A new study gives the best evidence so far that cancer patients are suffering because of shortage of drugs such as mechlorethamine, or nitrogen mustard, which had been in short supply until November 2012, when more became available. PHOTO FROM MEDICALOOK.COM

Young cancer patients who couldn’t get a key medicine because of a US-wide drug shortage were more likely to suffer a relapse than others who were able to get the preferred treatment, doctors report. It’s the first evidence that a longstanding drug-supply problem probably has affected cancer treatment results in specific patients.

The study involved more than 200 children and young adults with a blood cancer called Hodgkin lymphoma. Like childhood leukemia, it can be cured nearly 80 percent of the time. But a drug shortage that has worsened since 2009 is threatening that success rate, doctors report in Thursday’s New England Journal of Medicine.

Hundreds of drugs, including sedatives, antibiotics, painkillers and cancer treatments, have gone in and out of short supply in recent years. Reasons include manufacturing and contamination problems, plant shutdowns, and fewer makers and lower profits for certain drugs, especially generics infused during surgery or cancer treatment.

Doctors sometimes substitute different drugs for ones in short supply. But proving that the swaps led to poorer results has been tough, especially for cancer patients whose disease and response to treatment vary so much.

“We really couldn’t put our finger on, did anybody really suffer?” said Dr. Michael Link, a cancer specialist at Stanford University and past president of the American Society of Clinical Oncology.

The new study, led by Dr. Monika Metzger of St. Jude Children’s Research Hospital in Memphis, gives the best evidence so far that patients are suffering.

It focused on mechlorethamine, or nitrogen mustard, a drug that has been in short supply until last month, when more became available. Doctors compared results among 181 Hodgkin lymphoma patients who received the drug to 40 others who were given a different chemotherapy, cyclophosphamide, when the first choice was unavailable.

Only 75 percent of those given the substitute drug stayed free of cancer for two years versus 88 percent who received the preferred treatment.

“We can think of no credible explanation for this dramatic difference” other than the drug substitution, the authors wrote.

No patients died, but those who relapsed were given more aggressive treatments, including stem-cell transplants that have more side effects and can harm fertility.

One of them was Abby Alonzo, of Port St. Lucie, Florida. She was diagnosed with lymphoma three years ago, when she was 10. After eight weeks of treatment with the preferred drug, “she was doing wonderfully,” said her mother, Katie Alonzo.

Then doctors said they were out of it.

“I said, what do you mean, we don’t have the medication my child needs?” Katie Alonzo said.

After four weeks on the substitute chemo, Abby’s cancer had returned and spread to more places, her mother said. The child received high doses of chemotherapy and radiation and now seems cancer-free, although the treatments damaged her lung capacity, leaving her short of breath.

“When your child has cancer you live day by day,” and to find out a life-saving medicine isn’t available is “very, very frightening,” Katie Alonzo said.