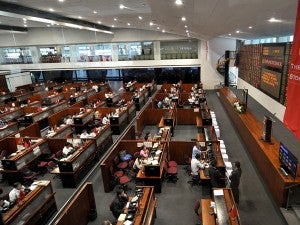 A general shot of the Philippine Stock Exchange in Makati. INQUIRER FILE PHOTO

MANILA, Philippines—With two weeks to go before the ultimate deadline, 19 listed companies are still below the 10-percent minimum public ownership required for continued listing on the Philippine Stock Exchange.

In the last few days, some companies such LTG Inc., the holding firm of the Lucio Tan group, and the Gotianuns’ Filinvest Development Corp. have undertaken equity deals to comply with the requirement.

Three of the companies with insufficient public float are currently suspended from the PSE: Philcomsat Holdings Corp., Cosmos Bottling Corp. and NextStage Inc.

In the case of Ayala-led Integrated Microelectronics Inc., AYC Holdings Ltd., a subsidiary of Ayala Corp., has agreed to sell a portion of its stake to a public investor to enable IMI to remain listed. IMI expects the transaction to be completed before the year of the end, according to the company.

Maybank ATR Kim Eng is also expected to announce an equity placement deal to meet the requirement before the year’s end.

The last time the PSE announced the list of non-compliant companies, there were 25 companies. Two companies previously on the list—First Metro Investments Corp. and Metro Pacific Tollways Corp.—are set to be delisted by Friday while one, Eton Properties, is undergoing delisting procedures.

Immediately after December 31, the PSE will impose a trading suspension on the shares of non-compliant listed companies for a period of not more than six months, or until June 30, 2013. If after June 30 a listed company remains non-compliant, the listed company’s shares will be automatically deisted.

The Bureau of Internal Revenue, as contained in its recent rule issuance relating to the minimum public ownership rules, will impose capital gains tax and a documentary stamp tax (DST) on every sale, barter, exchange or other disposition of shares of non-compliant companies starting the first trading day of 2013.

In contrast, trading of shares listed and traded at the PSE are subject only to stock transaction tax equivalent to 0.50 percent of the transaction value levied on the seller.