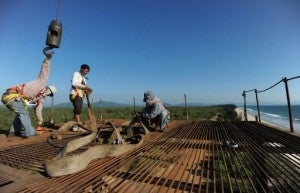 This file picture taken on Jan. 27, 2012, shows construction laborers working on an elevated platform at a deep sea port project in Mayingyi, part of the Dawei Special Economic Zone development. Myanmar sought on December 17, 2012, to drum up investment in a stalled multibillion-dollar sea port project at the heart of the former junta-ruled country’s efforts to revive its impoverished economy. AFP FILE PHOTO

YANGON—Myanmar sought Monday to drum up investment in a stalled multibillion-dollar sea port project at the heart of the former junta-ruled country’s efforts to revive its impoverished economy.

Thai Prime Minister Yingluck Shinawatra and a host of Thai business leaders flew to Dawei on Myanmar’s southern Andaman coast for talks with President Thein Sein and other officials about the joint development.

In July the two countries signed a memorandum of understanding to create a special economic zone for Dawei, with Bangkok agreeing to provide assistance in areas including security, infrastructure and logistics.

The huge project – led by Thai industrial giant Ital-Thai – would bring foreign investment for Myanmar as it emerges from decades of military rule, and provide Thailand with a gateway to the Indian Ocean and Western markets.

But it has faced funding difficulties and resistance from local villagers.

“Thai investors are afraid and hesitating about Myanmar’s political policies and the funding,” Ital-Thai marketing manager Pravee Komolkanchana told AFP in Bangkok ahead of the visit.

“Thai banks are less likely to lend money if it is to invest in other countries, especially in Myanmar.”

He said a number of Japanese investors were also due to join the trip, which the company hopes will put the project back on track.

Potential Myanmar investors are also wary, according to a businessman in Yangon who did not want to be named.

“We dare not invest there because of the costs,” he said. “We would have to pay Thai salary rates.”

“The project won’t benefit Myanmar much but mainly Thailand,” he added.

Work has yet to progress far beyond the construction of new homes for the thousands of villagers due to be resettled.

Next year the developers hope to begin work on infrastructure and factories in a planned industrial zone.

Opponents to the plan were emboldened by Thein Sein’s decision last year to suspend construction of a $3.6-billion Chinese-backed hydropower project in the northern state of Kachin in a rare response to public outcry.

But local resistance to Dawei appears to have eased, although some villagers are still reluctant to move despite the offer of new homes.

“We understand that we cannot stop the whole project,” said a local environmental activist who did not want to be named, adding that campaigners had instead vowed to oppose any coal-fired plant or chemical factory.