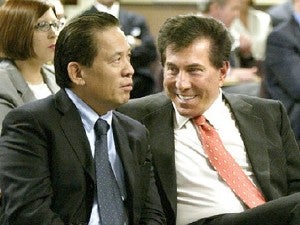 Tiger Resort Leisure and Entertainment Inc., the local unit of Okada’s gaming firm Universal Entertainment Corp., filed at the city prosecutor of Paranaque City the criminal complaint against the chair of Wynn Resorts.

The Okada group said this case was for being the subject to “defamation, damage to credit and other harm as a result of the press release posted by Wynn Resorts on its official website on February 19, 2012.”

In a press statement Thursday night, the Okada group claimed it was in dispute with Wynn involving, among others, Okada’s opposition to an anomalous donation pledged by Wynn Macau Ltd., a Macau subsidiary of Wynn Resorts in Macau.

“Mr. Okada’s actions did not sit well with respondent, as the latter feared that an investigation would reveal that the purpose for the huge donation in Macau was improper and illegal. This prompted respondent Wynn to use the Philippine project as a pretext to eliminate and take over Mr. Okada’s stockholdings (through Universal Entertainment Corp. and Aruze USA Inc.), and remove him from Wynn Resorts,” the Okada statement said.

Wynn, thereafter, hired a former head of the Federal Bureau of Investigation, Louis Freeh and his firm Freeh Sporkin & Sullivan LLP, to conduct an investigation on the alleged corrupt activities of Okada and his companies.

“The investigation was clearly an afterthought and was commissioned for the purpose of providing justification for the baseless findings of the compliance committee,” the Okada statement said.

That report alleged that the 69-year-old Okada had made improper cash payments and gifts totaling about $110,000 to gaming regulators, including those in the Philippines. It also alleged that Filipino regulators had received dinners, Chanel bags and suites at Wynn Macau, all courtesy of Okada.

Universal Entertainment through subsidiary Tiger Resorts broke ground on Jan. 26 at the 12-hectare Pagcor Entertainment City on Manila Bay that the Philippine government hopes will become Manila’s answer to the Las Vegas strip. Okada’s group and three others were awarded by state-owned Philippine Amusement and Gaming Corp. with a contract to build a hotel-resort complex in the Entertainment City during the incumbency of Efraim Genuino, Pagcor chairman during the presidency of Gloria Macapagal-Arroyo.

Besides accusing Okada of improper payments to foreign gaming regulators, Wynn, 70, forcibly bought back Okada’s 20-percent stake in the casino company at a deep discount.

Okada is now invoking the Philippines’ existing penal code to run after Wynn, noting that the primer on cybercrime issued by the Department of Justice last Nov. 26 provided that “as of the moment, cybercrime-related cases are dealt with using existing laws.”

The Okada statement said this means that “Internet libel may be dealt with or prosecuted” under the existing provisions of the RPC (Revised Penal Code) on libel.”