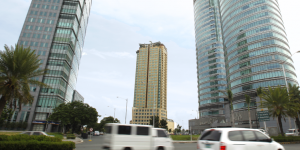 MANILA, Philippines—Filinvest Alabang Inc., one of the country’s pioneering property developers, unveils The Filinvest Tent, the first and only tent events place in the south of Manila, located at Alabang, Muntinlupa City.

“With progress moving southward, Filinvest City makes sure it leads where the action is. We are raising the bar for developments in the Metro. With its size and world-class features and amenities, the Filinvest Tent is the event locale this side of the metropolis, says Danilo Antonio, managing director of Filinvest’s Commercial Centers Group.

Accessible via major thoroughfares in the south, its major entry and exit points are an easy 15-minute drive away from Makati through the Skyway. “Filinvest City is setting a benchmark in urban center development with a slew of commercial, residential and lifestyle choices within walking distance or a few minutes’ drive away,” adds Antonio.

The Filinvest Tent is also the third-biggest among exhibition tents, next to the PICC Forum which has 4,292 square meters, and the World Trade Center Manila in Pasay which has 3,000 square meters.

More than just real estate, Filinvest City has changed southern living with world-class developments. Part of recent upgrades includes the launch of The Grills at South Station, a grillery and bar strip; and expansion of Festival Supermall, its flagship project.

The five-star hotel is part of the four-tower Entrata Urban Complex beside the mall. “The Entrata Shopping Center, at the ground and second floors of Entrata’s first tower, will open by the first quarter of 2013. It will have more than 50 retail outlets, specialty shops, services, wellness centers, international restaurants and a 4,000-square-meter entertainment facility,” says Antonio.