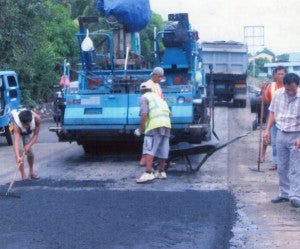 A road-widening project of the Department of Public Works and Highways in San Fernando, La Union. The Philippines continued to generate positive economic forecasts from foreign institutions following a surprise third-quarter growth. PHOTO FROM DPWH.GOV.PH

For this year, Citigroup raised its gross domestic product (GDP) growth forecast to 6.3 percent from 5 percent and to 6.1 percent from 5.3 percent in 2013, citing accelerated government spending and stable domestic demand.

Both Citi and HSBC expected the Bangko Sentral ng Pilipinas to keep its key interest rates on hold at 3.5 percent for the next policy rate-setting.

Minda Olonan, head of Philippine equity research at Citi, said the Philippines would benefit from more pronounced growth drivers such as excise tax reforms, accelerated bidding of key public-private partnership (PPP) projects and a credit-rating upgrade. She said public infrastructure could be the medium-term “game changer.”

“Better fiscal health is enabling the government to be more proactive in stimulating the economy. Aside from the PPP infrastructure agenda, the government is embarking on a P325-billion multi-year flood works and drainage program, a spending that is larger than the P233-billion cost of the PPP projects. We believe this may lift the country’s investment/GDP ratio that will eventually accelerate economic growth,” she said in a Dec. 7 research.

HSBC economist Trinh Nguyen said a major force behind this year’s growth has been the country’s strong institutions, specially the BSP.

“A slowdown of inflation to 2.8 percent year on year in November in spite of accelerating growth reflects the institution’s sound management of the economy,” Nguyen said, adding that benign inflation has given monetary officials the space to cut rates by 100 basis points in 2012.

But Nguyen said the BSP was not the only champion behind the country’s strong performance. “President Aquino’s efforts to increase efficiency of fiscal spending and revenue collection gave the government the room necessary to counter-balance the global slump with increased expenditure. A look at the breakdown of growth shows that private consumption, government spending and investment have contributed to growth thus far in 2012,” she said.

While external headwinds persist and likely drag down the Philippines’ electronics exports, HSBC expects growth to remain robust in 2013 on the back of strong fiscal spending, low interest rates and resilient remittances.

She said monetary officials would likely hold rates at the next meeting to assess the impact of the recent acceleration in growth as well as the 100-basis-point cut so far this year. “Inflation will likely be benign in first half of 2013, thanks to contained food and oil prices, allowing the BSP to support growth,” she said. “Though external conditions remain weak, strong domestic demand will keep the BSP vigilant and hold rates.”