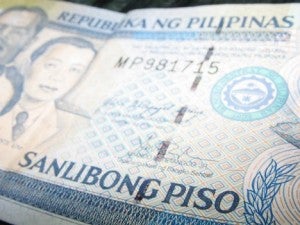 MANILA, Philippines — The peso moved sideways as investors weighed reports about a pickup in manufacturing in China and lingering concerns about budget problems of the US government.

The minimal appreciation of the peso came following the release of a government report saying the Purchasing Managers’ Index (PMI) in China hit 50.6 in November, up from the 50.2 in October. A PMI above 50 indicates an increase in manufacturing activity.

Traders said the increase in China’s PMI supported views that the Chinese economy would not suffer a hard landing as earlier feared. Moreover, they said, favorable economic developments in China would boost exports of neighboring countries like the Philippines.

China is one of the biggest export markets of the Philippines.

Meanwhile, traders said concerns have been lingering over the budget problems of the US government, which has been scheduled to implement higher taxes and spending cuts at the onset of 2013 unless legislators could do something to avert those. Economists said higher taxes and spending cuts might help address fiscal woes of the US government but could also dampen the still weak growth of the US economy.