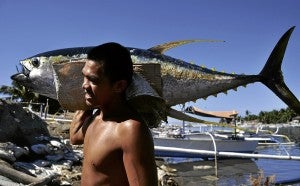 A MAN balances his prize catch on one shoulder at a fishing village in Ilocos Norte. Some 300 Pasuquin artisanal fishing families using about 200 small bancas are participating in the pilot phase of what the partners hope will become a nationwide campaign.

The project involves handline fishing, considered a “traditional and environmentally-sound method of catching large tuna species such as yellowfin (Thunnus albacares) and big-eye (Thunnus obesus).” Some 300 Pasuquin artisanal fishing families using about 200 small bancas are participating in the pilot phase of what the partners hope will eventually become a nationwide campaign.

Jose Maria Lorenzo Tan, WWF-Philippines vice-chair, president and chief executive officer, stresses, during the launch of the new premium brand Century Tuna Handline Individually Caught Tuna,  how every little initiative to reduce the stress on the world’s oceans could help.

“(Humans) are pushing the seas beyond (their) limits… Ocean health is rapidly declining,” he adds.  Tan points out that “any threat to the ocean is a threat to humanity”  so everyone should  make the effort to protect the world’s marine resources.

He says Century Tuna has taken the first step to promote a low-impact harvest of marine resources with the handline fishing project.

Greg Banzon, CCC vice president and general manager, says the company understands the “importance and need for sustainable fishing” so it was committed to support initiatives that would promote the sustainable harvest of marine resources. He points out that for its other products, CCC always followed and complied with internationally-accepted standards, buying fish only “from vessels that have been accredited and monitored.”

Calling the handline fishery project with WWF-Philippines exciting, Banzon says CCC was taking its commitment to sustainability a step further by supporting the initiative. Catching tuna one by one was “as sustainable as it gets,” he says.

The initiative was just a “baby step,” he points out, but Century Tuna, which exports to 26 countries, hopes it would show that handline fishing could be commercially viable.

He adds that, in supporting the project, Century Tuna also wanted to acknowledge the importance of the fisherfolk, thus, part of the proceeds would support the training and organizing of the participants.  WWF-Philippines would get P1 from each can sold for its Pasuquin Handline Tuna Fishery project. A can of Century Tuna Handline sells for P68, while a regular can costs P31.

Joel Palma, WWF-Philippines Conservation  Programs head, says tuna, which feeds and provides nutrition to millions of people throughout the world, is the main source of livelihood for the Pasuquin artisanal fisherfolk and hundreds like them all over the country. The WWF-Philippines and Century Tuna project, he says, would facilitate access to the market for these small fisherfolk.

Palma adds that, with the funds generated through the special line of tuna products, the partners hope the initiative could be replicated in other parts of the country so its benefits could be enjoyed by more people.

Tan says the Pasuquin project is another way of reducing the human footprint that was straining the world’s resources and causing major damage to the environment. It promotes a harmonious relationship with nature and the sustainable use of resources.

The Century Tuna-WWF-Philippines partnership aims to improve local fisheries management while ensuring sustainability of Pasuquin’s small-scale handline industry. The partners are collaborating with the Pasuquin municipal government, the Ilocos Norte provincial government, local fishing groups and the private sector in implementing the project.

“The program aims to enhance the Ilocos region’s handline tuna fisheries through improved management while increasing fisherfolk incomes for the next three years,” the partners say. To achieve this goal, they would adopt a traceability system, improve local fisheries governance and meat handling practices, maximize economic benefits by connecting the fisherfolk with local and foreign markets and establish external support services.

Palma states, “Our partnership with Century Tuna sets an example that local nonprofits, the corporate fishing sector and local communities can work together to address relevant issues against our marine resources. Our goal is to ensure that all parties benefit from this collaboration and, eventually, to replicate the program in other parts of the country.

Roque not surprised by opposition to ILC nomination: They do not wish anyone to succeed