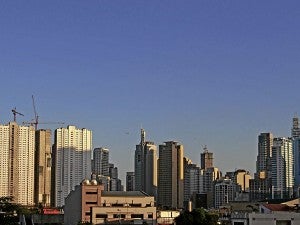 CRANES OVER MAKATI CITY A property boom in Metro Manila, described as the best in two decades, has pushed construction to its highest growth in at least six quarters, jumping 24.3 percent in the third quarter from a year earlier. EDWIN BACASMAS

The Philippine economy grew 7.1 percent in the third quarter year-on-year, exceeding expectations and making it the best performer in Southeast Asia.

The country’s economic growth was the strongest in Asia during the period after China’s.

“We are well on our way to surpassing our growth target of 5 to 6 percent this year,” Socioeconomic Planning Secretary

Balisacan said the high growth of the gross domestic product (GDP), the value of goods produced and services rendered in a given period, was expected to translate to more jobs and better incomes for Filipinos.

A jump in third-quarter farm output and a late rebound in exports also contributed to the economy’s 1.3-percent growth rate in the July-September quarter from April-June, which was three times as fast as economists had predicted.

Robust domestic consumption and higher government spending have helped cushion the economy from the worst of the global slowdown, while manageable inflation has allowed authorities to keep interest rates conducive to growth.

The country is the only economy in the world which the International Monetary Fund (IMF) believes will grow faster than earlier expected this year.

Earlier this month, the IMF raised its 2012 growth outlook for the Philippines to more than 5 percent from its October forecast of 4.8 percent, citing its sound fiscal and monetary policies.

“The Philippines is the diamond of the region this year,” said Enrico Tanuwidjaja, economist for Southeast Asia at RBS in Singapore.

Balisacan said the third-quarter performance of the Philippine economy was way above the market’s media forecast of 5.4 percent.

The growth momentum is expected to continue next year as government works to ease the cost of doing business and as more infrastructure projects under the private-public partnership scheme get underway, he said.

The government has set a record infrastructure budget of over P400 billion next year as it pursues major upgrades of roads, ports, bridges and airports to speed up growth and boost private investment.

Balisacan said these along with finance department’s tapping of the country’s record foreign reserves to pay its foreign debts would ease the upward pressures on the peso next year.

The peso is Asia’s best performing currency so far this year, up more than 7 percent against the US dollar on strong foreign inflows into Philippine stocks and bonds, fueled by forecasts of sustained and resilient domestic growth.

Year-to-date growth is already at 6.5 percent with services and industry (except mining) still driving growth.

Officials said the full-year growth would likely beat the target of 5 to 6 percent and move toward the previously “aspirational” 7-8 percent needed per year to spur employment and curb poverty.

Among industries, construction posted its highest growth in at least six quarters, jumping 24.3 percent from a year earlier as Metro Manila enjoys the best property boom in two decades. (See table below.)

Public consumption expanded an annual 12 percent in the third quarter, almost double the rate in the second quarter.

While export receipts of semiconductors and electronic data processing equipment contracted, both items contributed recently to increased imports, which may mean that manufacturers have been “stocking up” on intermediate inputs in anticipation of recovery in the global demand for electronic products, Neda said.

Agriculture also fared better in the third quarter than in the four previous quarters with increased rice and corn outputs as part of efforts to achieve food self-sufficiency. The weak fishery sector is a concern, however, Balisacan said.

In a briefing, presidential spokesperson Edwin Lacierda attributed the high growth rate to “sustained confidence in the leadership of President Aquino and his administration, which has consistently equated good governance with good economics.”

Mr. Aquino, who was elected in 2010, has instituted anticorruption reforms while seeking to boost revenues and improve government spending.

“The Philippine economy has shown both resilience and resurgence despite the global economic slowdown,” Lacierda said.

Finance Secretary Cesar Purisima said confidence in the way the government was being run had encouraged more people to do business in the country.

“The growth rate shows that the economics of good governance, or ‘Aquinomics’ works,” Purisima said in a statement.

“Good governance is paying off. President Aquino and his economic team must be lauded,” MBC executive director Peter Perfecto said via text message.

Trade Secretary Gregory Domingo said in a phone interview that he was “not surprised” by the 7.1-percent growth for the third quarter because the country was coming from a low growth base.

In the third quarter of 2011, the economy turned sluggish as exporters and other contributors to the economy felt the impact of the triple tragedy in Japan and the flooding in Thailand earlier that year.

“Nevertheless, it is good to post this level of growth for the third quarter. We will continue to help our business people with shared facilities, simplifying and shortening the process of starting a business, and educate entrepreneurs as well as students on how to take advantage of free-trade agreements.

Abad said growth was likely to stay robust in the fourth quarter.

“Public consumption will most definitely stay robust, fueled by high consumption levels during the holidays, continuing investments in public and private infrastructure, and the kick-start of election-related spending this Christmas season,” Abad said in a separate statement.

Abad said this would improve the country’s credit rating further. Both Moody’s and Standard & Poor’s raised the Philippines’ credit ratings to within one rung of investment grade in recent months.

However, Balisacan said there were still external threats such as the “looming fiscal cliff” in the United States and the long-running eurozone crisis.

He also said the government was closely watching the strengthening peso, which could hurt exporters’ competitiveness. With reports from Michael Lim Ubac, Michelle Remo, AFP

a. Transportation, storage and

b. Trade and repair of motor

Pagasa: LPA near E. Samar has potential to become first storm of 2021