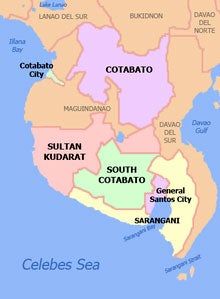 GENERAL SANTOS CITY, Philippines—Central Mindanao is the country’s second-top revenue generator as of the end of October, the regional office of the Bureau of Internal Revenue reported here Monday as it claimed to have surpassed its collection target thus far this year.

Rozil Lozares, BIR Central Mindanao chief, credited the vigorous tax drive they have been conducting in the provinces of Sarangani, South Cotabato, Sultan Kudarat and North Cotabato as the main reason for realizing a P4.37-billion collection from January to October. The regional tax office set a collection target of P4.311 billion this year.

Lozares said in an interview that under the intensified tax campaign, they have been conducting periodic tax compliance verification drives and close monitoring in coordination with private, local and national government agencies.

He said the BIR regional office expected the collections to increase further with collections for November and December.

“We are No. 2 throughout the country, next only to Metro Manila in terms of tax collection this year,” Lozares said.

Military units, men in uniform join forces on social media to back termination of deal with UP

As amihan weakens, expect warmer weather over the weekend — Pagasa