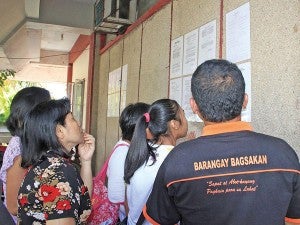 THEY WANT THEIR MONEY BACK More than 8,000 victims of Aman Futures double-your-money scam in Pagadian City troop to the NBI office to file complaints for the recovery of their money. RICHEL V. UMEL/INQUIRER MINDANAO

From the streets of Pagadian City to the golf course of Ozamiz City, the  “economic typhoon” that was Aman Futures Group Phils. Inc. is still the talk of the town as people are still baffled by the riches the company had brought to some and the misery it had inflicted on many others in northwestern Mindanao.

“It was like a storm,” a Pagadian motorcab driver described the short-lived operation of Aman Futures.

But unlike previous scams that principally victimized the poor, the rich were the main prey of Aman Futures.

The investment pooling racket started and grew among poor investors, especially among vendors and tricycle drivers of Pagadian. The high return on the investments earlier placed by the poor enticed the moneyed to join the game, creating an investment frenzy.

Big and supposedly astute businessmen came forward to admit that the rosy promise of very high returns prompted them into putting their money in Aman.

Early investors, who talked to the Philippine Daily Inquirer, said the scheme started in January. The Pagadian motorcab driver said he shelled out P2,000 as initial investment, money he earned from a week of ferrying passengers around the city.

The motorcab driver said about 20 of them pooled their funds to come up with the P50,000 investment. But only one had an investment account with Aman.

“The division of the proceeds consistent with our respective contribution was based on personal trust. After all, we were neighbors or colleagues in the trade,” the motorcab driver said in Visayan.

“In total, the returns I earned were several times more than my original investment. From these, we renovated our house and paid a down payment for a motorcab,” he added.

The motorcab driver’s P2,000 was referred to as his original investment, which he could not recover, because the firm paid only the returns, according to many of those who say they have current claims against Aman Futures.

In February, the scheme was introduced in Ozamiz City, attracting employees of a government-owned hospital.

The need to pool funds to come up with the minimum amount for the “double-your-money” offer required developing a network. Networking hastened fund pooling and expanded the number of people who later fell victim to the scam.

Those who oversaw fund pooling were the ones who held Aman accounts. The other contributors were called “riders.”

But as the racket underwent explosive growth, the investment “poolers” could just be riders of large account holders.

Soon, the minimum amount for the “double-your-money” offer was raised to P100,000. When Aman Futures’ operations were about to collapse, the amount was raised to P1 million.

Doubts about Aman Futures’ investment scheme cropped up as early as February. But investment poolers claimed that the doubts were unfounded, citing the growing number of people who were able to acquire brand new cars.

An advisory from the Securities and Exchange Commission (SEC) in  August practically had no effect, especially for those who were taking chances of becoming instant millionaires.

Among employees, many of their investments came from loans.

Asked about the business of the company, investors gave varying answers, indicating their poor knowledge of the true nature of Aman’s operations.

Aman was shaken by the August SEC advisory. By September, it advised the public, largely through word-of-mouth, that it would temporarily stop investment solicitations by December but would return by January 2013.

But by October, many investors reported long delays in the release of promised returns, usually deposited in the bank account of a registered investor.

The firm went bust with the official announcement of an SEC cease and desist order.

Following the SEC order, many investment poolers were nowhere to be found apparently to evade the riders who were demanding the returns promised them and their original investments.

Word spread that Aman was hopeful that things would return to normal as the secondary license for Aman Opportunities Inc. was being worked out with the SEC.

Investment poolers were reportedly preparing a manifesto imploring the SEC to issue the secondary license so that Aman would be able to reopen and allow them to recoup their investments.

Records show that Aman Futures got SEC registration papers only in June, months after it had pooled millions of pesos. But its registration was in connection with trading in commodities.

Despite the adverse developments, hopes among the investors that Aman would be able to pay them returns were running high.

They said Aman was supposedly working out the consummation of the electronic deposit transaction for P27 billion between a Malaysia-based bank and a bank in Cebu.

“We were told the central bank has stopped the transaction because it will entail an abnormal demand for money,” a minor investment pooler explained.

As of Thursday, there were no independent means to validate his assertion.