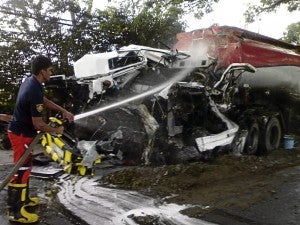 A FIREMAN douses water on the wrecked head of fuel tanker that was hit by a passenger bus in the Science City of Muñoz in Nueva Ecija recently.ARMAND GALANG/INQUIRER CENTRAL LUZON

As a motorist or a driver, you must have imagined, at least once, that the fuel tanker cruising beside you carrying thousands of liters of flammable fuel would just burst into flames and explode. Well, in Riyadh on Nov. 1, a fuel tanker crashed onto a highway post, burst into flames and exploded, leveling all the buildings beside it and killing 26, the Ministry of Health was quoted by The Hindu online news as saying. Hundreds of others were injured. Just recently, Arab News reported that the panel formed by the government to investigate the accident in eastern Riyadh would present its findings to Interior Minister Prince Muhammad bin Naif on Nov. 12.

Thus, as of press time for Inquirer Motoring, the official report has not been made public.

Regardless of the outcome of the government investigation, the horrific accident has sent chills down the spine of the riding and driving public. Here in the Philippines, especially, where a spate of truck and bus-related accidents have peppered the highways with dozens of innocent casualties and millions in property damages, the prospect of a wayward truck loaded with tens of thousands of flammable fuel colliding with an immovable barrier (or God forbid, another fuel truck) and then exploding in the middle of a busy intersection may just appear too grim, yet not too far-fetched, either.

Inquirer Motoring asked the country’s biggest oil distributors this question head-on: In the light of the Riyadh accident, are your fuel tankers safe?

However, Renato Fadullon, customer service and road transport manager of Total (Philippines) Corp. said, “Unfortunately, we cannot respond (fully) to the question because we don’t have all the facts (of the Riyadh accident).”

Abigail L. Ho, government affairs and institutional linkages manager of Seaoil Philippines’ marketing department, said her company cannot give a more comprehensive answer since the official report has not been released by the Riyadh government.

“We don’t really know the actual conditions behind the Riyadh tanker incident. There are many factors involved that could have led to the explosion,” she explained.

Fadullon noted: “The possibility of fuel leaking from a tanker after collision depends on the location and intensity of the impact and the general condition of the fuel tank and its piping. Generally, fire occurs not instantaneously with the collision but only after the leaking fuel reached a source of ignition like an electrical spark or open flame. This is why the immediate response in case of such accident is to cordon off the accident scene and eliminate all possible sources of ignition.”

Fadullon revealed that the minimum allowable thickness for a fuel truck/tanker shell is 4.5 mm. And this shell is checked every five years, in accordance with government regulations.

“Our contracted trucks comply with both international and local construction standards and are equipped with safety devices such as isolation switches, emergency valves and leak-tight manholes.

“Other safety mechanisms in place include a ‘safe-to-load’ checklist (conducted everytime a truck enters our depots) where we check tire thickness, seat belts, engine, discharge valves, safety equipment and electrical wires. Further, we ensure our drivers’ safety with the railings installed on top of the lorry to help them during product loading and unloading. We also employ a third-party specialist to check on the trucks every six months,” said Fadullon.

Fadullon disclosed that Total (Philippines) does not own or operate any fuel truck. “We have third-party contractors for our fuel, LPG and lubricants delivery requirements. At present, we have a contracted fleet size of 63 trucks.”

Total Philippines currently has 180 service stations in the country, with Luzon having the most (157), Cebu with 9, and 14 franchise stations in Iloilo and Bacolod.

On the other hand, Ho said Seaoil currently has a total of 123 tanker trucks, some of which are owned by the company, and others owned by accredited haulers.

Ho explained that the accreditation of these haulers is not perpetual, but renewed every six months, in June and December. Third-party haulers are evaluated based on weekly updates from the company’s transport officer, monthly delivery log from the transport assistant, and the biannual tank truck log contained in the company’s inventory management system, in the areas of quality, delivery, and service.

“The safety of the tank trucks is a large part of the evaluation process,”  Ho stressed.

Antonio V. Nebrida Jr., Pilipinas Shell Petroleum Corp’s media relations manager, said the company’s tank truck and driver safety processes is covered in the Health, Safety, Security and Environment (HSSE) protocols. “We follow a strict set of policies and standards that ensures HSSE is managed across the organization.” He added that tests on compliance to policies are made on a regular basis.

Nebrida stressed his company’s optimum vehicle safety and maintenance. “Our trucks are maintained regularly, according to truck requirements. Our policy requires us to purchase trucks with safety features such as Anti-Brake System and rollover protection.”

“With this we can monitor their speed and location. The unit will send off an alarm if speed limits are breached,” Nebrida said.

Chevron Philippines Inc., marketer of Caltex brand of fuels and lubricant products, said in a statement that “it recently reinforced its internal safety protocols that put a premium on road safety by having stringent guidelines and safeguards in place for its trucks and fleet cars.”

Chevron does not own any tank trucks, but relies on its accredited contractors to provide tankers that meet its “rigid safety and technical requirements”, said Ning V. Ignacio, assistant manager for government relations and communications.

Chevron’s heavy vehicles are installed with speed limiters which keep it from running faster than 70 kph. And the drivers cannot tamper into the mechanism, as the limiter is programmed via an onboard computer.

“But before we allow drivers to handle the tank trucks, they are required to first undergo extensive defensive driving and safety training,” said Jim Beltran, Chevron area transportation manager.

Beltran added: “We also see to it that all vehicles have at least 50 percent length side and full width rear reflective marking for nighttime visibility to other vehicles (retro reflective conspicuity), thus allowing it to be seen better even when visibility is low, especially with its LED tail and brake lights and predominantly white painting scheme.”

For destination safety monitoring, Chevron trucks are also installed with GPS, which indicates the whereabouts or location of trucks so that it can be monitored via the Internet and through mobile phones.

Other safety features in the trucks include a tachograph to show driving time and speed in a graphical format, ABS, object proximity sensor at passenger side, airbag and belt tensioner, battery isolation switch to interrupt all truck and trailer electrical circuits while the truck is loading, and a windshield made of “safety glass” which is laminated and non-splintering, among others.

“All of these safety features are also backed up by measures that would ensure the comfort and well-being of our drivers on the road, such as air-conditioned cabs, driver seat is air operated, with lumbar support and adjustable to accommodate different size drivers. All seats have three point lap/shoulder inertia reel seat belts, to boot,” Beltran added.

The trailers are equipped with dual collapsible handrails (air operated) for fall prevention and bolted channel side guard protection on both sides of the vehicle.

Fadullon said Total Philippines’ drivers, at the minimum, must have two years’ experience as a lorry/tanker driver with a professional driver’s license (restriction 1238—large trucks) and meet the company’s medical (including drugs and psychological tests) and NBI clearance requirements.

“Aside from these, they are required to undergo our Asia Pacific Transport Improvement Program where they receive training on our road transport standards and procedures. They are also required to attend a training session on our product loading and unloading procedures along with periodic fire fighting and oil spill drills. We also conduct breath analyzer tests (to check for alcohol consumption) daily. Further, we conduct annual driving seminars and quarterly safety meetings with our drivers,” Fadullon said.

Ho said that for drivers of Seaoil trucks, routine human resource screening processes are conducted. Once they pass that, they must go through a week-long training, mostly on loading and unloading, prior to actual delivery. Drivers who fail the evaluation after the training are let go.

“In general, Seaoil practices stringent safety measures in all aspects of its operations. Its health, environment, and safety department has policies governing various parts of company operations, including transport. For its tank trucks, in particular, the company follows National Fire Protection Association standards. Seaoil is cognizant of the fact that it is handling sensitive commodity, so safety is always a priority,” Ho said.

“We ensure that the drivers that we hire are qualified to drive our trucks. They are not just licensed professional drivers authorized to drive but they have to pass a series of training modules in order to drive our tank trucks.”

He added that drivers are trained regularly with proper driving and delivery techniques. There are also various refresher courses that have to be taken in order to continue driving their vehicles. Failure to comply places the driver in default, which prohibits him to handle a vehicle until he passes the required competencies.

“We have a system of rewards and incentives to our drivers for good performance,” Nebrida said.

He added that authorized routes are predetermined. Drivers should take only these routes when delivering to customers.

“Transporting petroleum products is a very serious part of our business, given the extremely volatile nature of the products we carry. Thus, there is a system of safety processes and procedures we follow to convey these products from our terminals and depots to our retail service stations,” Nebrida said.