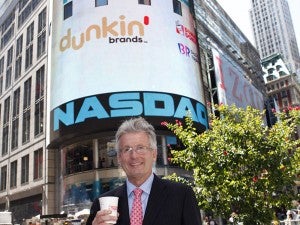 NEW YORK — Shares of Dunkin’ Brands Group Inc. soared nearly 47 percent on Wednesday, their first day of trading, feeding the demand of investors looking to trade in coffee and doughnuts.

Dunkin’ Brands shares began trading on the Nasdaq under the symbol DNKN, opening Wednesday morning at almost $25. Shares closed at $27.85, up from the $19 initial public offering price. Dunkin’ Brands sold 22.3 million shares at the offering price, raising about $423 million.

Most stocks get a one-time pop on their first trading day. Still, Dunkin’ Brands’ reception indicates that investors are willing to shell out for certain initial public offerings — and not just for the tech companies like LinkedIn Corp. and Groupon Inc.

The public offering of Dunkin’ Brands’, which owns Dunkin’ Donuts and the Baskin-Robbins ice cream chain, comes at a time when restaurants are struggling as the economy forces Americans to cut back on eating out. The company has said it will use the money it raised on the stock market to pay down debt, in part because it wants to expand, both overseas and in the U.S. outside of its strong hold in the Northeast.

Larry Miller, an analyst who follows Starbucks Corp. for RBC Capital Markets, compared Dunkin’ Donuts to Tim Hortons, the coffee and doughnut giant of Canada that he said had difficulties expanding into the U.S.

“Dunkin’ is a regional brand,” Miller said. “That will be a big test for Dunkin’, proving they work in different regions.”

But the brand’s name recognition could help. The company has carved an identity as a place where the working class can afford to buy a cup of coffee, seeking to distance itself from upper-crust Starbucks the same way that Mac users distance themselves from PC fans.

Dunkin’ is the seventh-biggest restaurant chain by U.S. revenue, compared with rival Starbucks, which is No. 3. According to Technomic, Dunkin’ Donuts posted a bigger increase in U.S. revenue last year than even McDonald’s Corp., which is often heralded as the gold standard for sales growth. And Dunkin’ Donuts, opened more new locations in the U.S. than any restaurant except Subway.

It’s too early to tell if people will invest in Dunkin’ Brands just because they like its coffee, but having name recognition in the Northeast, where Dunkin’ Donuts locations and investment bankers alike are concentrated, can’t hurt, said Conrad Lyon, an analyst who covers Krispy Kreme for B. Riley & Co.

“There a lot of people walking around New York and Boston in the investment business,” Lyon said. “They know the brand and they’re loyal to the brand. They may not put it in their (firm’s) investment fund, but they may put it in their personal fund.”

Dunkin’ has made some changes since a trio of private-equity firms__ Bain Capital Partners, Thomas H. Lee Partners of Boston, and Carlyle Group — bought the company in 2005 for $2.4 billion. Under the investment firms, Dunkin’ Brands brought in a technology head, added egg-white sandwiches to try to appeal to the health-conscious and began selling its beans in grocery stores.

And Dunkin’ is in a good position to do well in the future, say analysts who predict that breakfast and snacks — the main fare of Dunkin’ Donuts — will continue to grow over the next decade.

In 2010, Dunkin’ Brands’ revenue grew 7 percent, partly because of new locations but also because more customers are coming through the door and buying more things per visit. Net income, however, fell 23 percent as expenses rose, including fees paid to the investment firms that own it, costs for refinancing debt, spending on technology, and reserves set aside for potential legal costs.

If there is a weak spot in Dunkin’ Brands, it could be U.S. sales of Baskin-Robbins ice cream, which fell 5.5 percent last year. And Dunkin’ Brands lost money in the first quarter of this year, as it paid more in interest payments, administrative expenses and the cost of ice cream.

The Dunkin’ public offering comes at a time when as many as nine IPOs could be priced this week, which would make this the busiest week so far this year. Initial public offerings are gaining steam again after recovering from lows during the financial crisis, when companies decided it wasn’t worthwhile to try to raise money on the market.

So far this year, 87 IPOs have been priced, 23 percent more than at this time a year ago, according to IPO investment adviser Renaissance Capital.