‘We did things nobody dared to do’

“Dapat … Whappak! (It should be … whappak),” exclaims the legendary screen villainess.  A dolled-up Bella Flores explains how to slap the opponent in the short film “Kontrabida 101 (Villainy 101).

A production of Benchingkofilms  and directed by Joey Reyes, “Kontrabida 101” is a cheeky discourse on the villain’s intimidation savvy, the  stare and the raised eyebrows that keep people trembling even if the villain is wearing sunglasses.

Flores’ monologue sounds like a metaphor for Bench’s mind-set amidst the competition.  The film thrives on the irony that an 84-year-old actress stars in a digitized medium.  Although Flores is a stranger to the millennial generation, no one in Philippine cinema has taken after her. Likewise, Bench underscores, albeit exaggeratedly, that the brand gets stronger over time. 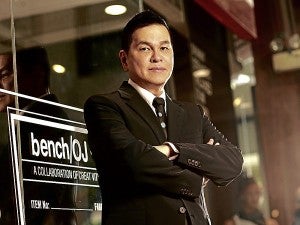 Indeed, if there is a local fashion brand that tells its story loudest, it has to be Bench. Since its inception in 1987, the brand has won awards in marketing, advertising and retailing.  Amid the 25th anniversary activities that were marked with pomp, glamour and camp, Bench merited with the Agora Awards for Export Marketing.  The Philippine Marketing Association recognized its operations in 62 branches overseas.

“We export not just products or raw materials, but a brand. The Bench brand stands for an entire vision and the Filipino lifestyle, specifically. This is a marketing feat, since it is one thing to sell to a domestic market, while it is a completely different ball game overseas, alongside the world’s biggest and best brands.  The winning strategy is to think, act, and look global, wherever you are,” explains Benito Chan, chair of Suyen Corporation, the mother company of Bench.

“We enter the foreign market by infusing a Filipino flavor to our designs but still making it adaptable globally. This has been one of our strengths which we will continue to build on in the future.”

Strategies differ in various countries, naturally. In the Middle East, it targets the Filipino population although it has been attracting more non-Filipinos to its stores.  On the other hand, Bench has become a direct competitor to major underwear brands in China since it entered the market 10 years ago.

Undoubtedly, Bench has created a credible match with the Hollywood and Korean endorsers. It has forged a bond with consumers and pumps up sales.

“To establish a true global brand, we are trying to create a Bench family of endorsers from local celebrities to international ones. A Hollywood endorser brings in a different flavor to the brand, as would a Korean. When you put together the entire stable of Bench endorsers, who are all from different backgrounds, ages, nationalities, styles, body types, it really paints a picture of a brand that embraces the world. It boosts the brand’s image because Bench clothes look good on all of them. There is universal appeal.”

Clearly, the tender ages of Adam Levine, Lucy Hale and Lee Min-Ho and their brisk casualness are expected to resonate with kids who live in jeans and t-shirts worldwide.

Aside from export marketing, Bench received an Agora Award for Entrepreneurship in 2000 for building itself as a “maverick” brand. The media has gushed over out-of-the box strategies and its verve in pushing boundaries.

“We did things nobody dared to do. That is what the word ‘entrepreneurship’ connotes—making initiatives and taking risks,’” declares Chan. 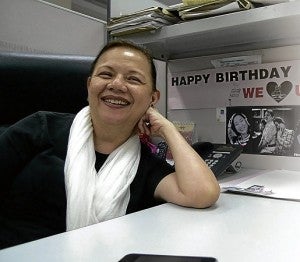 “You have to know the right time to launch or sell it. Timing is the key, and that is the beauty of it, because you can never be complacent, and you are always learning no matter how experienced you are or how much you have already achieved. ”

One of Bench’s biggest stunts was putting excitement in the underwear and making a private item very public. Its biannual underwear fashion show not only drove more sales but also catapulted the brand’s image.

“Through the show, it is easier for us to market our brand in the international scene.  Just recently, Fox International covered the Bench Universe 2012 underwear show and made a special which will air in Star World this December. This will definitely help in strengthening the brand equity in the Asian region,” says Chan.

Unknown to the public, Bench has also been producing merchandise that has social relevance. To create awareness on the preservation of endangered species in Calauit sanctuary, Bench came out with a safari collection. Four years ago, it supported the I am Ninoy campaign by printing Ninoy Aquino t-shirts, the proceeds of which went to charity.

Kris Aquino partnered with Bench for the Freedom cologne to commemorate 25th anniversary of People Power. Part of the sales went to Aquino’s charity for classroom building

Bench has always been an early adaptor even in green trends. Two years ago, it initiated the Green Wednesdays in which customers are encouraged to use their shopping bags. It’s arguably the first local brand to use bamboo fiber in its line called Envi (short for Environment).

“We wish to raise awareness on bamboo fiber, since bamboo is a very sustainable resource. It is much more sustainable to grow and harvest than cotton, using less water and energy, and as a fabric it is softer, more durable and comfortable,” says Chan.

To cater to the savvy millennial consumer, Bench has embraced ways of creating dialogue through social media. Chan is amazed at the quick reactions from Twitter.

“Customers tweet me and I can respond immediately. For example, we used to ban picture-taking inside the store. Now, with Twitter, we encourage it. A customer can take a picture of anything they find interesting in our merchandise and then a few minutes later it is ‘trending.’ Or, they can Tweet me directly if they have comments or suggestions. This is very empowering for a customer—the ability to directly communicate with the chairman of the company and to feel that they have been acknowledged. It  is empowering for me too— because I can stay focused on the bigger picture without losing sight of the details that can make or break a customer’s experience,” says Chan.

Although Chan has been the front liner, he credits the success to the family which runs Suyen Corporation. His sister Nenita, vice president of finance, keeps a sharp eye on the cash flow. Her husband, Virgilio Lim, Suyen president, is a math whiz and   management savvy.  The family dynamics is described as synergistic with constant check and balance.

“Nenita and I know the ins and outs of business just from watching our parents run Liwayway cornstarch—from instinct and learning by osmosis.  The next generation is different.  They now have business degrees and are more scientific about it. Nenita and Virgilio’s eldest son Bryan, my nephew and godson, got his MBA from AIM and is thriving in the Business Development department of Suyen. He is in charge of our expansion, including brand acquisition. Their two daughters, Kristine and Suyen, are in charge of Brand Management. Each one got a degree in fashion merchandising, one from New York and the other from London. They maintain the standards in terms of product quality and merchandising,” he says.

Chan adds that the culture of family has extended to the employees, suppliers and endorsers. Some long-term relationships began with Chan’s eye for spotting talent.

He discovered Richard Gomez’s photograph in Jun de Leon’s studio in 1987. It has been arguably the longest celebrity-brand alliance. Although likes of Richard Gutierrez have a natural fit with Bench’s market today, Gomez’s enduring presence embodies the company’s values of loyalty, friendship and stability.

In the early ’90s, Chan was impressed with the Italian look of designer Gina Yupangco during a fashion show at the Manila Polo Club. He then tapped her for Herbench.  “She was like a fixture at the office that had a very unique and interesting way of dressing up.  She gave that personal touch to HerBench,” recalls Chan.

When she died of a lingering illness, Chan acknowledged that she was a tough act to follow.

As of this writing, Chan is traveling through Israel and Jordan. Living on a suitcase, he travels five months in a year.

“I am still discovering and learning things,” he says.