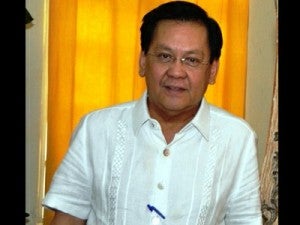 MANILA, Philippines—Sen. Sergio Osmeña has defended the inclusion of real estate transactions on the list of activities that need to be reported to the Anti-Money Laundering Council if they involve an outright cash payment of $10,000 or P420,000.

Osmeña, author of Senate Bill No. 3123 that increases the number of covered activities and predicate crimes under the Anti-Money Laundering Act (AMLA), dismissed criticism that the proposal, if enacted, would dampen the real-estate industry in the country.

Osmeña said some of his colleagues had expressed concern over the inclusion of real estate transactions on the list of covered activities.

“I did tell them that one of the biggest money laundering activities in this country is buying real estate. The big drug dealers buy real estate,” Osmeña told reporters last week.

“They’ll buy in Cebu, Davao, in Zamboanga…all over. Then after one or two years, they’d sell and [the proceeds] would already be legal,” he said.

Osmeña said this was why in many countries, real-estate dealers were covered by reporting requirements under antimoney laundering regulations.

Aside from real estate agents, also proposed to be covered by the reporting requirements are casinos, those persons dealing in precious metals and stones, and those managing investment funds, among others.

The Philippines was fortunate the Paris-based Financial Action Task Force (FATF) didn’t impose sanctions after the Senate failed to pass his bill before the congressional recess, Osmeña said.

The measure was the third among three regulations the FATF demanded from the Philippines.

Congress already passed the first two and the Philippines was upgraded from the FATF’s dark gray list to its gray list—or the roster of countries taking up measures to comply with antimoney laundering standards.

The Philippines’ failure to pass Osmeña’s measure raised fears the FATF would relegate the country to its blacklist during its meeting in the middle of October. Fortunately for the country, it did not.

Being on the blacklist would have meant stringent even restrictive international regulations involving financial transactions to and from the Philippines.

It would have severely affected the country’s overseas Filipino workers.