A new Santa’s coming to town 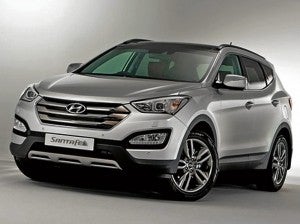 The new Santa Fe that is.

After a world debut at the 2012 New York International Auto Show last April, Hyundai’s all-new and mid-size crossover is all set to sustain the local craze that it sparked five years ago.

Named after Santa Fe City of New Mexico, the new Santa Fe  has been totally redesigned and it comes with 2-wheel drive and 4-wheel drive platforms with the 2.2-liter R-eVGT engine with 6-speed automatic transmission. In line with Hyundai’s Storm Edge “fluidic sculpture” design language first featured in the new Sonata, the new Santa Fe body claims to have increased distortion rigidity by at least 16 percent. Weighing 12 kg less, its smart 6-speed slushbox offers about 12 percent better fuel mileage thanks to an extra cruising gear, a flat torque converter and rejigged layout. This highly compact transmission also weighs about 12 kg less than the previous model.

IN DIRT, mud or snow, the new Santa works well.

It also has a new and perkier powerplant, albeit the smaller displacement. The 2.2-liter engine has a maximum power rating of  194.30 hp, compared to the  171.62-hp power rating of the old Theta II model, thanks to its eVGT (electronic variable geometry turbocharger) with a third-generation common rail fuel system developed by Bosch that comes with piezo-electric injectors that promises to have better accuracy and efficiency in fuel delivery. The previous intake system was a VIS (variable intake system) with a returnless fuel system.

For starters, the all-new Santa Fe starts literally with a push-button start/stop system and the new “Active Eco” feature keeps fuel thirst in check with a little compromise in torque and power but it is still more than adequate even for a robust stop-and-go traffic. For better night vision, the headlamps now come with cornering lamps and its newly introduced Flex Steer feature has three modes—Comfort, Normal and Sport, allowing the driver to manually select from its electronic power steering various feedback levels. With Normal mode in the middle, Comfort mode offers lighter resistance while Sport mode offers about 10 percent more resistance for more spirited driving specially on twisty roads.

THE SANTA FE now boasts a Bluetooth link on the infotainment system and a dual-zone climate control system.

In dirt, mud or snow, the new Santa works well since it comes with a Hillstart Assist Control (HAC) and Downhill Brake Control (DBC) as standard for both models to enable the Santa Fe to negotiate thru steep hills whether ascending or descending on or off the road. Other safety features include ESP (electronic stability program) and TCS (traction control system). The traction control is a first for this model range, which automatically applies brake pressure on a single wheel (depending on road conditions) to ensure the Santa Fe handles the curves safely.

Inside, dual front airbags, power door locks and windows are standard and it also comes with a Bluetooth link on the infotainment system and a dual-zone climate control system is offered on both models. Prices for the 2WD and 4WD variants are P1.768 million and P2.228 million, respectively. It comes in Creamy White, Phantom Black, Arabian Mocha, Red Merlot and Titanium Silver.