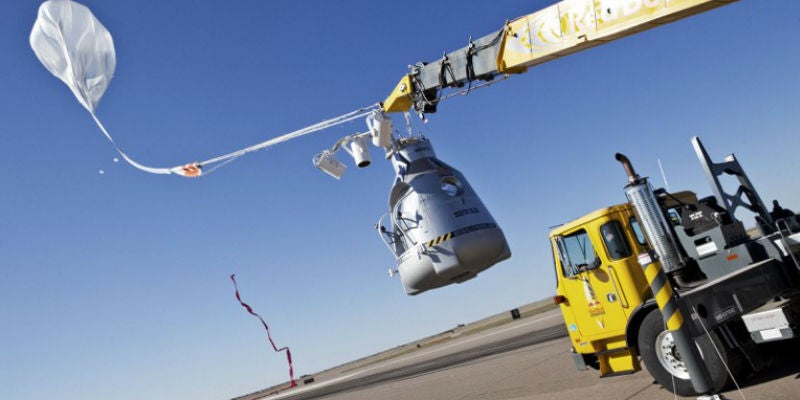 This picture provided by www.redbullcontentpool.com shows the crane and balloon launching Pilot Felix Baumgartner of Austria in the capsule during the final manned flight for Red Bull Stratos in Roswell, New Mexico, USA on Oct. 14, 2012. Daredevil Felix Baumgartner lifted off from the New Mexico desert on Sunday, in his second attempt to make a record-breaking jump from the edge of space. AFP PHOTO/www.redbullcontentpool.com/BALAZS GARDI

VIENNA—Felix Baumgartner, set to leap from the edge of space on Sunday, is no stranger to breaking records. But neither is the firm bankrolling and sponsoring his audacious jump: energy drink maker and marketing trailblazer Red Bull.

The Austrian company not only invented a whole new sector in the beverage industry, becoming in less than 30 years a global corporate titan with more than four billion euros ($5 billion) in annual revenues.

It has also trodden its own unorthodox path in marketing, re-writing the rule book on how to sell a product, focusing not on taste but on the drink’s energy-giving properties while projecting an edgy, high-adrenaline image.

Baumgartner’s spectacular leap from 23 miles (37 kilometres) above New Mexico, which will see him plummet back to Earth at the speed of sound, watched live by millions of people on the edge of their seats around the planet, is the crowning glory of this strategy.

It will be his second attempt at the feat, after the initial scheduled jump was postponed due to high winds on Monday,

“This is taking it to a whole new level,” Jonas Feliciano, beverage industry analyst at Euromonitor International, told AFP. “It has turned a PR event into a news event.”

Very few other companies, one notable exception being Apple, manage to do this, Feliciano said.

The Austrian daredevil is basically “a flying can of Red Bull,” said Christoph Boesenkopf from Austrian advertising agency Wirz.

Red Bull the drink was born when Dietrich Mateschitz, an Austrian toothpaste marketing executive, stumbled during a trip to Asia in the early 1980s across a beverage popular with the locals known as Krating Daeng, Thai for water buffalo, that cured his jet lag.

Partnering with Thai businessman Chaleo Yoovidhya, who died this year, the pair decided to make it fizzy, can it and sell it beyond Asia under the Red Bull brand.

From the beginning Red Bull’s strategy was different.

This was the first drink where in the marketing, no importance was put on the flavour – one early review famously said that “no other new product has ever failed this convincingly” – but instead on its effect.

Urban myths and health concerns about Red Bull abounded, meanwhile, making regulatory approval in many countries a long process. It was even banned in several countries including France for a while.

It was said for example that one of its main ingredients, taurine, came from bulls’ testicles. There were whispers too that it was akin to a legal amphetamine, with nicknames including “speed in a can” and “liquid cocaine”.

But such talk served only to raise the drink’s profile and increase its notoriety among the young, its main target market, helping Red Bull achieve the holy grail: becoming “cool.”

The company also eschewed just putting adverts in newspapers and magazines, and as well as merely sponsoring sports teams, it owns them, such as the football club New York Red Bulls and a highly successful Formula 1 team.

It has also organized “extreme” sports events such as hair-raising aircraft racing, something called “Crashed Ice” involving downhill urban ice-skating and the “Flugtag”, where members of the public pilot outlandish, homemade contraptions off piers into water.

But Red Bull Stratos, as the project surrounding Baumgartner is known, is something else entirely.

His jump, which will see him lifted to the edge of space beneath a enormous balloon before stepping into the void in a specially made suit for 15-20 minutes of freefall before parachuting the rest of the way, has been five years in the making. Supporting him is a 100-strong team of experts.

Other events and teams that Red Bull bankrolls very rarely make the front page of newspapers. On Sunday though, more than 40 television networks in 50 countries will carry the live feed and over 130 digital partners will stream it live on the Internet.

But such an enormous volume of coverage also means that for Red Bull, if something goes wrong, the backlash could be huge, said media psychologist Peter Vitouch from the University of Vienna.

“If there was an accident, the company could find itself accused of behaving irresponsibly, of financing this just for publicity and of driving someone to their death. That would be an absolute disaster,” Vitouch said.

But after an initial backlash, Red Bull would survive in the long run — and maybe even benefit, Feliciano of Euromonitor said.

“It would be a tragedy. But as morbid as it sounds, the press would just increase further. Bad press is still press.”

“But I would assume that if this was something with a ridiculously high fatality rate, you would not see Red Bull’s name attached to it.”