Stepping out of daddy’s and grandpa’s shadows 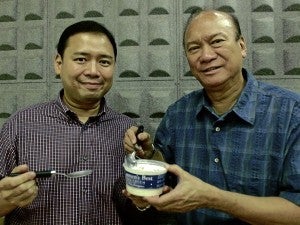 He stepped out of the shadow of his famous father, former senator Ramon B. Magsaysay Jr. and grandfather Ramon Magsaysay when he launched Carmen’s Best.

Entrepreneur Francisco “Paco” Delgado Magsaysay and his product captured the palates of Manila’s discriminating clientele with a dense but seductive frozen dessert laden with such sophisticated flavors as Madagascar vanilla, chocolate cinnamon and Spanish almond and Horlicks.

Paco then points at the small commercial ice cream maker in his Makati office.

In the past two years, the ice cream has been produced in his house in an exclusive subdivision. As an indicator of its growing business, an industrial machine, which runs three-phase power, is his latest acquisition. However, the voltage is way too high for the electrical capacity in his household.

“I’ve been working on Meralco to get an industrial connection. It tests your patience,” he says.

Paco’s day job is president of the family-owned Asian Cable TV Holdings Inc. that has networks in five provinces. He credits his father, who is running for Senate again, for pioneering in the Philippine cable TV industry. At the Senate, Magsaysay was exposed to the agriculture industry and its challenges, among them the heavy importation of rice and dairy products.

After his term, the politician-businessman envisioned that agriculture was the way to go. He then established a dairy farm in Bay (pronounced Bay-I) in Laguna with the help of the National Dairy Authority that brought in the pregnant heifers.

Paco could have run for politics with his pedigree and education. He studied in America for 13 years and took up college at St. Thomas University, majoring in marketing.  However, he felt he wasn’t cut out since he was accustomed to the frankness and seeing everything in black and white that was so unlike the Philippine culture.

The older Magsaysay handed over the reins of Real Fresh Dairy to Paco. “I run it for him. He’s the chairman. He goes through the broad strokes.”

Paco has always been an ice cream lover. His most unforgettable brands are Ghirardelli’s (“I’d have a butterscotch sundae every week.”) and Richardson’s, which has its own farm and from which became his inspiration for his business.

As an entrepreneur, Paco was always looking for added value in the milk products. One day, a food technician churned cream from the milk. It turned out that the cream contained 40 percent butterfat. 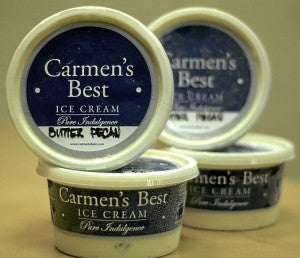 With his knowledge of ice cream making from YouTube, he experimented with the farm cream  and discovered a winner. While most ice creams contain 15 to 18 percent butterfat, Paco’s  product holds more than double the amount.

“The cream is the best top of the dairy. It’s  not the liquid part but the solid part. Milk with more butterfat fetches a higher premium. ”

He named his product after  his youngest daughter Carmen. “It’s a girl product. I wanted to make it appear that it was not a separated 44-year-old who made it,” says Paco.

He points out that most ice cream brands hype on the juicy fruit chunks, nuts and chocolates. He insists on focusing on the purity of ingredients. The sweetness comes from the cream and not from the high sugar content found in most commercial brands.

Given the challenges of supply and the superior quality of the ingredients, Paco targeted the high-end market that wouldn’t mind paying P350 for a pint.

“When we had a distributors’ meeting, we didn’t talk about flavors. We talked about the feed of cows, the breed of cows that gives the best cream. Iced cream—that’s what it is. If the cream is not good, we will not have quality ice cream.”

Aside from word of mouth, Carmen’s Best became known through Deal Grocer and Facebook, which he says reach two different markets. Deal Grocer attracts people who look for value while the FB market is well traveled, well informed and enjoys a certain lifestyle. Then there are the prominent clients such as Washington SyCip whose favorite flavor is coconut and a billionaire who requests almond.

Although Paco established the ice cream company, Carmen’s Best Dairy Products, the business is shared with a food scientist, a finance person and his father.

“As an entrepreneur, it is important to pick the best team you can find. That means getting the right people with the right skills to complement my weaknesses and to have ‘ownership’ of this business.”

He adds that the tapping the best talents to design packaging, to determine the perfect size for selling and to write the tagline were just as valuable.

On his work ethics, Paco explains, “I don’t like to lose. I’m very intense.  It turns off a lot of people because it’s not the culture of Filipinos to be intense. In business,  I’ll do anything and everything to make the company succeed. If  it means staying till 3 a.m. to make ice cream because the person who does it is not feeling well, then I’ll stay up till 3 a.m.  If it means to deliver because my driver is not in, I’ll do it. I do just about anything to have a successful bottom line. I’m not too proud.”

Paco attributes his success in the dairy and ice cream business to the Master in Entrepreneurship, a course for entrepreneurs,  at the Asian Institute of Management (now  in the Ateneo Graduate School of Business).

“The ice cream business was nowhere in sight when I started my ME course. But everything I learned in the program gave me courage, confidence, and know-how to get into this business. I didn’t have any culinary background. I only got into baking as I wanted to bake cookies for my kids.”

Magsaysay acknowledges his son for turning his passion into a business. “Sa mga bata, dapat gayahin yung may passion.”

Paco admits that the business has grown exponentially that the supply can’t meet the demand. It has been profitable enough for the company to donate to the PGH Medical Foundation. Plans are afoot to establish a bridge line for people who can’t have enough of his kind of ice cream.