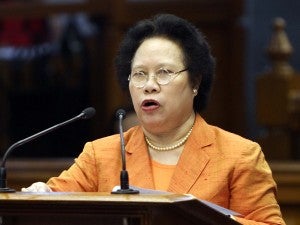 MANILA, Philippines – Senator Miriam Defensor Santiago has advised the government to borrow money locally instead of from other countries, saying that borrowing from foreign sources has a negative effect to Overseas Filipino Workers (OFWs).

When the government borrows from abroad it increases the amount of dollars in the country lowering the exchange value and strengthening the peso currency, she said.

“For OFW workers, if the peso is strong, the value of their remittances goes down so they have to send more dollars to their families who live on a peso budget. Either they draw on their savings from abroad or they borrow. Either way, their response is not sustainable and poses more hardship for them and their families,” Santiago said during a recent business forum in Bacolod.

“Borrowing from local sources will also help Filipino savers. On the other hand, borrowing from abroad will only help foreigners,” Santiago added.

She also cited the weakening global economy as a cause for concern that should deter the government from borrowing abroad. The Bangko Sentral ng Pilipinas (BSP) has more than enough dollar reserves to finance the government, she said.

“The Bangko Sentral ng Pilipinas (BSP) has offered to accommodate the government’s foreign exchange needs. It has $80 billion gross international reserves. I advise the government to take on BSP’s offer. It’s a win-win situation for both,” Santiago said.

Santiago also pointed out the flow of “hot money” into the country as a cause for concern. The country’s high interest rates, compared to the developed world’s near-zero interest rate, was attracting a large amount of investible short-term funds, she said.

“The Philippines happens to be an attractive place for such short-term funds. With its relatively high interest rates and the strong likelihood that the peso will continue to appreciate in value, it makes sense to park one’s investible funds in the Philippines,” Santiago said.

“But while this is good for short-term foreign investors, it wreaks havoc on the domestic economy. Imagine how the strong peso has adversely affected the lives of many overseas Filipino workers and workers in exports businesses,” she added.

Santiago also praised the Philippine economy for a “respectable” 6.1 percent growth in the first half. She however questioned whether the growth was inclusive and could be sustained.

She cited statistics showing that 2.8 million Filipinos are unemployed while 8.5 million are underemployed as of July 2012.

“While the government continues to trumpet the economy’s growth, the more important question is whether this growth is inclusive and sustained. This means that economic growth must benefit the great majority of our people,” Santiago said.