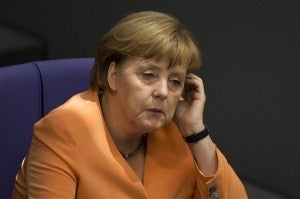 German Chancellor Angela Merkel attends the first session of the budget 2013 debate at the parliament Bundestag in Berlin, Germany, on Sept. 11, 2012. According to a new poverty report drawn up by the labor ministry, the gap between rich and poor in Europe’s top economy continues to widen. The report is being seen by some as a covert call for a redistribution of wealth, possibly via higher taxes for the rich. But Chancellor Angela Merkel has been quick to rule out any such moves. AP PHOTO/MARKUS SCHREIBER

BERLIN—The economic “miracle” that has enabled Germany to escape the worst of Europe’s debt crisis is largely passing by some of the most vulnerable people in society, critics say.

And as Germany finally begins to feel the pinch from a crisis that has pushed most of its neighbors into recession, it is the low-wage workers and the old-age pensioners who are being hit hardest, the critics charge.

According to a new four-yearly poverty report drawn up by the labor ministry, the gap between rich and poor in Europe’s top economy is continuing to widen.

In 1998, 45 percent of Germany’s total wealth was owned by the wealthiest 10 percent of the population.

Ten years later, that proportion had risen to 53 percent, while around half of all households owned just 1.0 percent, the study found.

“Hourly wages that are no longer sufficient – even if someone is working full time – to feed a one-person household are exacerbating the poverty risks and undermining social cohesion,” the labor ministry warned.

Unions argue that those very same labor-market reforms that have helped steel Germany against the worst of the debt crisis and brought down unemployment to post-unification lows are contributing to the ever-widening gap between rich and poor.

The absence of a legal minimum wage and the strong expansion of the low-paid job sector, and so-called “mini” jobs, to name by a few of the much-vaunted reforms introduced by the then German chancellor Gerhard Schroeder, come at the expense of society’s poorest, critics say.

Hungary’s EU Commissioner, Laszlo Andor, even went as far as to say that Germany’s low-wage policies have in fact helped to prolong and deepen Europe’s current crisis, because they have created some of the economic imbalances across the region that are to blame for the continent’s woes.

“For the past decade, Germany has exercised an enormous degree of restraint in wages in order to become more competitive for one or two years. But that has had consequences for the other EU countries, too,” Andor told the daily Frankfurter Allgemeine Zeitung in an interview.

He called for the introduction of legal minimum wages in all sectors and wage increases.

And as Germany’s population ages the downside of the miracle is also becoming more visible among pensioners.

“Even if you’ve paid into the system for 35, 40 or 45 years and even if you have a qualified job and a regular salary, you may still not receive a pension above the poverty line,” Labor Minister Ursula Von der Leyen told parliament last week.

Economic experts at the Hans Boeckler Foundation think tank calculate that an employee earning around 2,000 euros ($2,600) per month will need to work 43.5 years to receive the minimum monthly pension of 700 euros in Germany.

The labor ministry’s poverty report is being seen by some as a covert call for a redistribution of wealth, possibly via higher taxes for the rich.

But Chancellor Angela Merkel, facing new elections next year, was quick to rule out any such moves.

Nevertheless, the experts at Hans Boeckler were clear that “with the pension and labor market reforms seen over the past 10 years, the poverty risks for elderly people have increased.”

It warned a situation could develop similar to that in the United States, where pensioners often have to work to make ends meet.

More than 761,000 German pensioners are already having to work to complement their pensions, with 118,000 of those aged 75 or over. And that trend is rising.

Germany is already the country in Europe with the largest population over 65 and one of its lowest birth rates.

PCG gives insight on ‘challenge’ that made Chinese ships flee