Meet the lady behind Messy Bessy 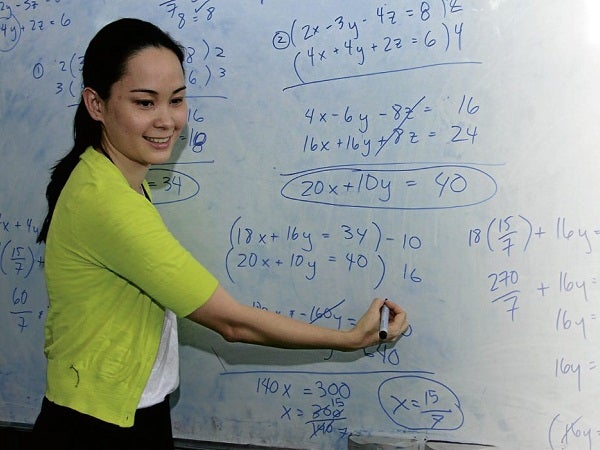 People who want to take up a social malady, usually set up a foundation.

Kristina “Krie” Reyes-Lopez, on the other hand, made a business instead. Not only was she making a gamble in commerce but she also hired at-risk youths as her workers.

The founder of Messy Bessy Cleaners Inc, a line of organic household and personal care products, aims to tackle a socio-economic challenge—building self-esteem and teaching skills to the disadvantaged. 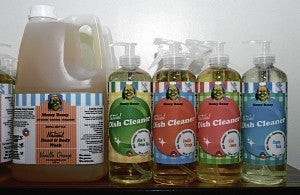 A LINE of organic household and personal care products. Photo by Nelson Matawaran

Messy Bessy came from Lopez’s first project, HOUSE, the acronym for Helping Ourselves Through Sustainable Enterprises.

“I wanted to form a group of companies that would educate these at-risk youths,” she says.

A mechanical engineering graduate from Ateneo, Lopez joined the Rustan Coffee Corporation in 1997 as a pioneer employee and financial analyst.  At that time, the company was still setting up the first Starbucks store in 6750 Ayala.

Through the years, she was transferred to different departments, the last of which was heading the corporate social responsibility program.

In the course of her CSR work, Lopez realized that her calling was to fight poverty through a sustainable livelihood instead of relying on donations. After eight years with Rustan Coffee Corporation, she quit her job and researched on social entrepreneurship, which aimed to improve lives while operating profitably.

On a trip to San Francisco, she visited the Delancey Street Foundation, an organization that rehabilitated ex-convicts, substance abusers, and the homeless into individuals with marketable skills. These people worked in Delancey businesses such as the moving company and a restaurant. 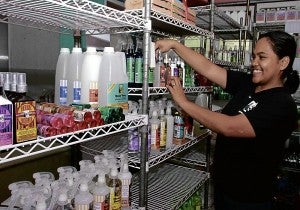 MESSY Bessy started with a capital of P50,000 in 2007. Photo by Nelson Matawaran

With the American foundation as the model, Lopez then collaborated with the Virlanie Foundation, a home for sexually abused girls and victims of human trafficking.

She first set up a temporary employment agency for customers who needed help in odd jobs such as wrapping gifts during Christmas or stuffing envelopes.

“The girls didn’t have the right work ethics. Sometimes they wouldn’t report to work,” she says. The business folded up.

Then a light bulb moment came.  “I would get headaches with the cleaners in our apartment. I felt there was a need for green cleaning. People were talking about it, including Oprah on TV.”

Lopez gathered recipes online for natural cleansers and experimented on them. “I thought that it would be a great idea to make them for people who didn’t have the time,” she says.

She sourced the bottles, designed labels and tested the products on friends and family. Her first marketing initiative was to sell them in Christmas bazaars and online. Customers liked the products and bought in bulk to give as presents. 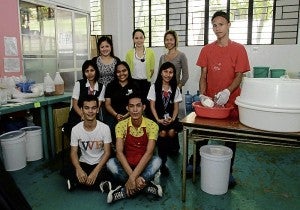 MESSY Bessy has accepted over 60 at-risk youths who underwent a program. Photo by Nelson Matawaran

With an initial capital of P50,000, she started the Messy Bessy in 2007, hoping to hit the triple-bottom line: People, planet and profit.

On saving the planet, Messy Bessy positions itself as biodegradable, nontoxic, using all-natural ingredients that kill bacteria and doesn’t emit toxic fumes and chemical residues.  The products cost a little more than the mainstream. For instance, the dishwashing liquid, made of essential oils and coconut, costs only P6 more than the leading brand.

While other all-natural cleansing brands sport the white and green packaging, Messy Bessy graphics are inspired by colorful mid-20th century graphics.  The best selling products are predictably the basics-laundry and dishwashing cleaners with moisturizing properties, disinfectants, room sprays and all-purpose cleaners, most of which contain distilled sugarcane vinegar and essential oils.

Equally popular are the multi-tasking spray-on hand sanitizer that can also disinfect potties, clean surfaces and exude room fragrance. The insect repellant chucks in citronella for andiroba oils from the carapa tree.

But the social mission of transforming lives is the raison d’etre of Messy Bessy.  “We don’t put it on the labels. We’re not into false marketing about saying  ‘Buy this and help,’” maintains Lopez.

The company designed the Helping Ourselves program, which consists of academics, work ethics such as a tracking chart for their attendance, values formation and work tutoring.

“We give them an allowance so they can study. If they don’t maintain a certain level of performance in school and work, they are kicked out,” she says.

Messy Bessy has a tie-up with Manila Business College for the working student program.  Although it is subsidized by  MBC, Messy Bessy pays for the tuition initially but which they paid back through their work. It’s like a student loan.”

However, doing good doesn’t produce instant rewards. On the contrary, Lopez faced many tests dealing with workers who grew up in the streets with no scruples and lived on basic survival instincts. There were incidences of theft that led to mass termination at one point.

Aside from carrying their past traumas, the workers hold a “poor man’s mentality” of lack of self-respect and initiative.

“If they don’t show up for the bazaar during the weekend, they won’t come to work because of hiya (shame),” she says.

Another reason for absence is fulfilling family obligations first. “Working is still an option for them. We try to address this attitude.”

Youths from institutions also find it difficult to adjust to a regular life where freedom requires responsibility.

Although the company has been working with psychologists and social workers in dealing with the at-risk youths from institutions,  Lopez maintains that the management is still held responsible for their behavior.

Toughing up, she is very upfront when she knows her workers start getting difficult.  “Too much mercy is bad for them. I don’t give in easily,” she says.

In the past five years of the social enterprise,  Messy Bessy has accepted over 60 at-risk youths that underwent the program. Although many have dropped out, they’ve learned as much skills as they could.  Eight have received a high school diploma and found jobs in other companies.  The company has eight college scholars.  The company has absorbed three graduates.

Among her rewards are seeing the workers write business reports or execute PowerPoint presentations even without their high school diplomas, deal with suppliers, present workshops to customers in English. Go Negosyo awarded Lopez as Starpreneuer for embracing a profit-making venue with a social mission.

On profitability, Lopez says the company is breaking even. The office and warehouse are modest and use air-conditioning only in the production room. “Our costs  are not normal to a company because of the education that we provide,” says Lopez.

“Still, we experience growth every year because customers are getting more conscious of the products they use at home. We have 50 distribution outlets in Luzon and Cebu. We hope to get bigger increments in the coming years because of potential ventures.”

She runs a company of 20 that includes five managers  from diverse backgrounds. “I’ve hired a good team. They’re not only competent, but they’re willing to be a teacher, guidance councilor and a social worker,” she says. Lopez herself teaches college algebra to the kids.

“At the start, we hired a chemist. Now we have an in-house pharmacist and a production manager who professionalized the system. We strive to give them industry rates. We want to operate like a regular company, not a foundation. The managers were attracted to the social enterprise,” she explains.

The fact that she pays herself, hires talented people and plans to expand her product range and rent an additional space means she’s been focusing on the balance sheet.

“Our goal is to be a multi-brand green company. For the advocacy, I want a right program from kids. When they work here, it’s like going to a university, we can plan their career paths and guide them.”