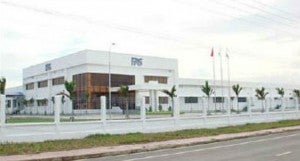 The Furukawa Automotive Systems plant in Vietnam PHOTO FROM FURUKAWA.CO.JP

Japanese manufacturers are making a beeline to the Philippines due to its young, English-speaking labor market following a rising yen at home and risk factors like floods and political changes in other hubs.

Furukawa Electric’s subsidiary, Furukawa Automotive Systems Inc. (FAS), established a wholly owned unit called Furukawa Automotive Systems Lima Philippines Inc. with a capitalization of 1 billion yen to make wire harnesses for Japan-made automobiles by March next year. FAS said in a report that increasing demand for its products made it put up a “first step” export hub in the Philippine for its Asian expansion.

Cemedine will establish Cemedine Philippines Corp. with a capitalization of 16 million yen to manufacture and sell adhesive, ceiling and related products by April 2013.

Expanding their Philippine presence are Canon Inc. and Brother Industries Ltd., which are set to make printers with initial investments of 6 billion yen and 4.23 million yen, respectively.

These companies are targeting Asia, Latin America and Europe for exports, according to the Japanese Chamber of Commerce and Industry of the Philippines (JCCIP), which has 500 member-companies. As Japanese manufacturers locate in the Philippines, their suppliers will follow suit. This would create a supply chain that would attract a wider range of manufacturers and suppliers, JCCIP vice president Nobuo Fujii said.

Analysts said the Philippines has high-quality labor with lower cost and more stable growth compared with China or Vietnam. Transportation distance to Japan is also shorter from Manila and while Thailand has been a traditional choice for manufacturing expansion, the flooding that further hit supply chains that suffered from the triple tragedy in Japan in 2011 has made companies seek alternatives.

To nurture the Philippines’ supply chain, Trade and Industry Undersecretary Cristino Panlilio said in a phone interview that the Department of Trade and Industry (DTI) helped in marketing not only the major manufacturers but also their suppliers in a bid to nurture the Philippines’ supply chain. Exports zone locators also get incentives such as income tax holidays and exemption from duties on imported capital equipment.

Fujii also expressed hope that Japanese firms would soon be able to monetize billions of tax credits that were due way back in 2002 and 2003. He said the JCCPI was awaiting the schedule and rates to be provided by the Bureaus of Internal Revenue and of Customs. A tax credit is a rebate or refund of import taxes and duties paid to the government by a firm or manufacturer registered with the Board of Investments for raw materials, supplies and semi-manufactured products it has brought abroad to produce the goods it will export thereafter. To facilitate the refunds, the JCCPI has long been urging the Philippine government to implement a more flexible tax rebate system by allowing cash refunds, cross utilization and fast releases at par with those of other Asean economies.

The DTI and the Japanese Embassy have jointly reported that despite “difficult situations” the two countries faced, particularly in 2011, trade volume between the Philippines and Japan increased to P382.7 billion from P335.4 billion in 2010. Japan remains the biggest investor in the Philippines, with total investments of P77.4 billion last year, P19.1 billion more than P58.3 billion in 2010.

Asian Development Bank senior country economist Norio Usui has said in a presentation that manufacturing investments are good for the Philippines as these create more jobs than other sectors.

Japan International Cooperation Agency economist Toru Yoshida said that although foreign direct investments across Asia plunged in 2009 during the global financial crisis, the Philippines lagged behind its neighbors in terms of attracting investors. However, the Philippines could take advantage of rapidly changing global conditions (labor issues in traditional manufacturing hubs, supply chain disruption due to Asian floods, hyper-appreciation of the yen that made firms look for new sites) to present itself as a new growth area.

Read Next
Philippine stocks seen testing new highs
EDITORS' PICK
Garcia softens stance, meets IATF halfway on swab-upon-arrival policy
TeaM Energy pushes development programs to help in pandemic rebound
Want to help local farmers? Shop small and eat Real Food
ICC is everything but a court of ‘white people’
Manila is 78th most expensive city in the world for foreign workers
Piolo Pascual: The Ultimate Heartthrob continues to level up
MOST READ
Sharon Cuneta on living in the US: ‘Nagagawa ko lahat ng normal na bagay’
Mike Nieto asks fans: ‘No below the belt remarks’ toward South Korea
Duterte-Duterte tandem possible but ‘winnability is another question’ — Binay
Pangilinan says LP making efforts to reach out to Lacson, Isko, others
Don't miss out on the latest news and information.