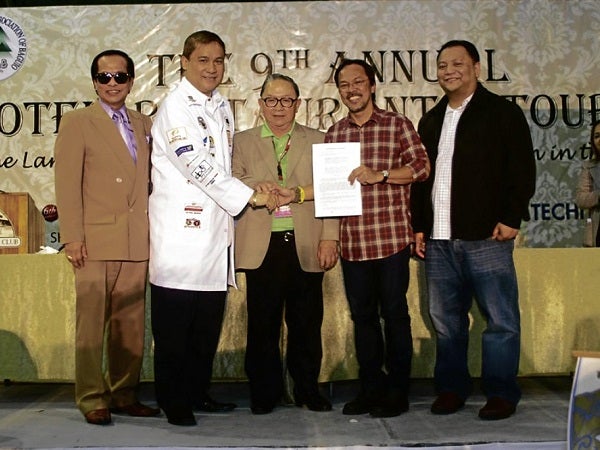 BAGUIO CITY—After a three-year negotiation, a group of singers and songwriters and the association of hotels and restaurants here have signed an agreement on the use of Filipino music in establishments in the city.

Singer Noel Cabangon, Filscap president, says the agreement was not only about collecting fees but a way of educating people on the importance of copyright.

“As [business establishments] pay, they will also fully understand the importance of copyright and understand the copyright law. This is also a way of making them value the song as an intellectual property,” Cabangon says.

He says shops, shopping malls, hotels, restaurants and bars that play OPM in their establishments should pay copyright fees.

With the signing of a memorandum of agreement (MOA) on Saturday, Cabangon says Filscap will continue conducting an information campaign on the value of music.

Fees collected from establishments playing OPM will also be set aside to fund programs on music creation, music festivals and other activities that encourage the development of Filipino music.

He adds many business establishments have yet to fully understand and appreciate the value of intellectual property because this is not tangible.

“So these concepts have to be explained. These are mandated by law. We need an intensive information campaign,” he points out.

“We cannot just collect from clients just because we can sue them if they don’t. They have to be informed about why they should pay and with the information, they can pay willingly,” he says.

He notes Filscap’s 1,250 members will benefit from the payment of fees. Filscap is encouraging local composers and songwriters to become members so they can reap benefits from their creations, he says.

Anthony de Leon, HRAB president and general manager of Baguio Country Club, concurs the agreement is a way of respecting the work of Filipino musicians.

Lawyer Moises Cating, HRAB chair, explains: “Music is important in our business because it entertains our customers, and our customers appreciate music a lot.”

The MOA states HRAB members would be given special licensing concessions and discounted rates depending on the sitting capacity of the establishments.

Any complaint and pending cases filed by Filscap against local establishments will be dismissed if they become HRAB members.

“Although Filscap is primarily comprised of Filipino composers and publishers, we protect over 20 million copyrighted local and foreign works.

That’s about 90 percent of the copyrighted musical work being played or performed in the country. This means that chances are, your establishment plays or performs music from our ever-increasing repertoire,” it states.

Cabangon adds Filscap would also sign a MOA with the Philippine Retailers Association of Cebu this year. “We were not able to collect fees for several years and now we want to assert that right which is accorded to music creators and writers,” he says.