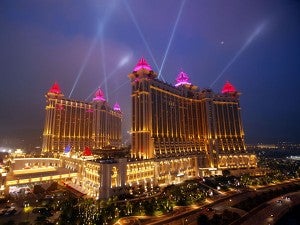 In this May 15, 2011 file photo, the complex of Galaxy Macau is illuminated in Macau. In the Philippines, a $4-billion casino project will soon rise from reclaimed land on Manila Bay. In South Korea, foreign investors are scheduled to break ground next year on a clutch of casino resorts offshore. The projects are part of a casino building boom rolling across Asia, where governments are trying to develop their tourism markets to capture increasingly affluent Asians with a penchant for gambling. AP/Vincent Yu, File

MACAU — In the Philippines, a $4-billion casino will soon rise from reclaimed land on Manila Bay. In South Korea, foreign investors are expected to break ground next year on a clutch of casino resorts offshore. And on the eastern edge of Russia, authorities plan a resort zone aimed at drawing Chinese high-rollers.

The projects are part of a casino building boom rolling across Asia, where governments are trying to develop their tourism markets to capture increasingly affluent Asians with a penchant for gambling. They’re building glitzy, upscale Las Vegas-style resorts in a bid to copy the runaway success of Asian gambling hubs Macau, which rapidly became the world’s biggest casino market after ending a monopoly, and Singapore, where the city-state’s first two casinos raked in an estimated $6 billion a year after their 2010 openings.

The casino boom highlights how the gambling industry is being propelled by the region’s rapid economic growth, with millions entering the middle class thanks to rising incomes that allow them to spend more on travel and leisure pursuits. But it has also intensified debate over the social ills and perceived economic benefits of the gambling industry.

“Definitely, the success of Macau has set off a chain reaction in what is happening in the region,” said Francis Lui, vice chairman of Macau casino operator Galaxy Entertainment Group. “After the success of Macau and Singapore, of course you see more countries now assessing the pros and cons of having gaming as a driving engine for bigger economic growth.”

“In the future the region is going to have more casinos.”

The fortunes to be made are immense. After Macau ended a four-decade monopoly and allowed in foreign operators such as Las Vegas Sands Corp., Wynn Resorts and MGM Resorts International, the former Portuguese colony on the southern edge of China quickly overtook the Las Vegas Strip as the world’s biggest gambling market. The foreign operators helped supercharge growth in Macau — previously known for its aging, seedy, no-frills casinos — by building flashy gambling palaces drawing wealthy mainland Chinese. Last year the city of just 500,000 people raked in $33.5 billion in gambling revenue.

In Singapore, the Marina Bay Sands and Resorts World Sentosa, which together cost more than $10 billion, have put the city on track to becoming the world’s second-biggest gambling market.

By 2015, consultants PricewaterhouseCoopers predict the surge in Asian casino revenues will have “fundamentally reshaped the landscape of the global industry” and help Asia edge out the United States as the world’s biggest regional market.

A number of projects planned or under way across the region are helping to fulfill that prediction.

Cambodian operator Nagacorp, which runs the only casino in the Southeast Asian city’s capital, Phnom Penh, plans to open a $369 million expansion including hotels and shopping later this year. The company operates buses equipped with massage chairs to pick up punters from neighboring Vietnam.

Vietnam will get its first casino-resort next year. Canadian company Asian Coast Development is set to open a five-star MGM-branded beachfront complex in the southeast. It’s part of a $4.2 billion tourist development aimed at drawing foreign visitors.

Both countries bar their own citizens from entering casinos.

Even the neglected Russian Pacific port city of Vladivostok, perhaps best known as the eastern terminus for the famed Trans-Siberian Railway, plans to get in on the action. Authorities announced plans in May to invite foreign investors to help develop an entertainment zone with no less than 12 casinos aimed at attracting Chinese and other North Asian visitors. When completed, annual revenues could reach $5.2 billion, according to a forecast by consultants.

In Japan, where legalization has been debated for years, lawmakers have been inching closer to approving casinos as a way to stimulate the economy and boost tourism following last year’s devastating tsunami and nuclear disaster.

But not everyone is convinced it’s a gamble that will economically benefit Japan, which already allows gambling on horse, boat and bicycle racing as well as slots.

“If we get casinos in Japan, that will destroy the nation,” said Ken Wakamiya, an author and anti-gambling activist.

He pointed out that pachinko, a slot machine-like game, is one of the country’s most popular forms of gambling. But he said it’s played widely by poor people and as a result made them even poorer.

“Introducing casinos is a plan to rip off our own people. It is an act of madness,” he said.

A similar debate has played out in Taiwan, which will get its first casino after residents on the island of Matsu voted in favor in July. Casinos are banned in Taiwan except on outlying islands, where approval in a referendum is needed.

Some countries are looking to Singapore as a model for how to bring in gambling without the side-effects. The country, which authorized two big casino-resorts as part of an effort turn the Southeast Asian city-state into a gambling and tourism magnet, is tightening what are already some of the strictest measures in Asia to control organized crime and gambling addiction.

Junket operators — middlemen that bring in wealthy high-rollers but which have also been linked to organized crime — are almost completely banned. Regulators also plan a big hike in the amount casino operators can be fined for breaking regulations that include charging locals 100 Singapore dollars ($81) a day to enter. The government also expanded a program banning people who are bankrupt or receiving welfare from entering casinos, raising the number to 43,000.

Despite the measures, more low income players are betting bigger amounts, according to a 2011 survey by the National Council on Problem Gambling, while the Samaritans counseling hotline reports receiving an increasing number of calls involving problem gambling.

“The gambling industry is not a sector that creates value-added products or services and therefore will have little impact on the development of the future economy,” said Vincent Wijeysingha, treasurer of the opposition Singapore Democratic Party. “It does not contribute to the deepening of economic capacity or the introduction of new or innovative services or industrial techniques.”

In the Philippines, church leaders have spoken out against a $4 billion project that the government hopes will turn a site on Manila Bay into the country’s version of the Las Vegas Strip. Casinos have been legal since 1977 but many are small and run-down.

Foreign investors including Macau’s Melco Crown Entertainment, Japanese pachinko tycoon Kazuo Okada’s Universal Entertainment and Malaysia’s Genting Bhd. are working separately with local partners on the project, which will include hotels, restaurants, museums, a marina and boardwalk and a monorail.

The project, dubbed Entertainment City, is aimed at drawing wealthy foreign gamblers but church leaders say it would promote “a culture of gambling” in the conservative, majority Roman Catholic Philippines.

In South Korea, Universal and two other companies plan to build resorts in a special economic zone near Incheon Airport on Yeongjong Island. The companies, which also include Caesar’s Entertainment Corp. of the U.S. and South Korea’s Paradise Group, are scheduled to break ground in September 2013, said Lee Woo-hyung, director of tourism and culture department at the Incheon Free Economic Zone Authority.

Some are skeptical that the projects can rival the profits made in Macau, which has benefited from a seemingly endless stream of mainland Chinese gamblers.

Beijing has been happy to let its wealthy gamble their fortunes away in Macau, a special administrative region of China. But it might start clamping down on exit permissions to prevent citizens from boosting a regional rival’s gambling tax coffers if geopolitical tensions flare.

That risk is most acute in the Philippines, which has sparred with Beijing over a disputed shoal, said Grant Govertsen, managing partner of Union Gaming Research Macau.

“You’re entirely dependent on the good graces of Beijing to be successful,” said Govertsen. “And I don’t like those odds.”