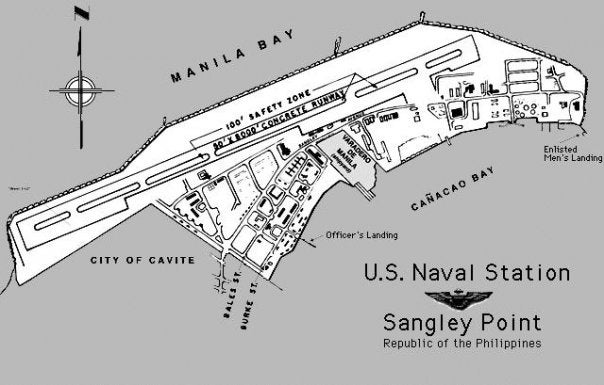 A map of Sangley Point military facility, which used to be a US naval station. The developer of Aseana City, near the Entertainment City by the Manila Bay, is looking into the viability of developing an offshore airport near Sangley Point. PHOTO FROM FACEBOOK.COM

The developer of Aseana City, which owns key development real estate neighboring the so-called Entertainment City, is looking into the viability of developing an offshore airport by reclaiming land near the Sangley Point military facility in Cavite City.

Delfin Wenceslao Jr., chairman of Aseana Holdings Inc., said in an interview that an offshore airport would ease congestion at the Ninoy Aquino International Airport (Naia) complex, drive tourist growth to the Aseana Business Park that hosts both Aseana City and Entertainment City, and address security concerns posed by the traditional mushrooming of real estate developments around airports and other sensitive facilities located inland.

With four first-class hotels, casinos, business process outsourcing buildings, condominiums and related facilities being put up at the Aseana Business Park, the area could become a convention and tourism hub, Wenceslao said. Its proximity to the convention and shopping areas of nearby SM Mall of Asia complex could attract a huge number of foreign and local tourists, he said. Specialized schools being built in Aseana City would also make it an ideal place for residential and business developments, he said.

Wenceslao said his company already knew through a study that it was technically viable to construct an offshore airport. “What we’re trying to answer is, is it financially viable to put up the airport now?” he said, noting that Hong Kong had the same island-airport model.

Studying the financial viability of having an offshore airport to keep pace with developments in the Aseana Business Park, among others, would require about P100 million to P200 million, the construction expert said.

The offshore airport, he said, would be located six or seven kilometers from the Aseana Business Park. “We’re talking of creating about 1,400 hectares, minimum, with right of way so that we don’t have issues with the military,” Wenceslao said. A two-kilometer causeway could be built to connect the offshore island to the mainland, he said.

The financial study could easily be completed, he said, if the government would support such an undertaking through the current airport administration in Naia.

“The present airport has a single runway and if this gets blocked or congested, the traffic has to be converted to Clark. The recourse is to put up a second runway with a common tower, or just put up an airport in one site. Sangley is expandable and will not be encroached (upon) by other developments because it would be an island,” Wenceslao said.

The financial study would push through if the government would support it, Wenceslao said. If the project would be found viable, the government could provide the site or develop the offshore airport on its own, he said.