THIS looks like the traditional jeepney on the outside…

The Philippine jeepney is at once the pride and the curse of Philippine roads. It stands as a source of pride because of the ingenuity that it represents: the conversion of a military vehicle into a popular mode of transport. On the dark side, setting aside the resistance to road rules of many so-called professional drivers, the jeepney is, sadly, a badly outmoded vehicle. The high ground clearance may be ideal for rough roads and flooded streets, but the stoop-inducing ingress and egress, discomfort of the side-facing seats, and exposure to the heat and pollution will not have anyone taking the jeep if a suitable alternative is around. As for the pollution aspect, it is apparent from the clouds of smoke they emit, that a lot of jeeps are major sources of particulates that cause environmental damage and ill health. Smoke belching is a sure indication too of inefficient use of fuel. Any replacement for the jeepney must tackle all of these negatives if this four-wheeled “king of the road” is to survive—and if we are to survive it.

…but it’s powered by a Toyota-derived engine fed by LPG.

Here and now, a company is set to improve at least one aspect of the jeepney: the most important part, its drivetrain. A company called GoLPG will be launching a program designed to offer jeepneys a cleaner, more efficient alternative power plant fed by liquefied petroleum gas (LPG), or propane. The objective of the project is to promote retrofitting of jeepneys with an LPG-fed engine or, alternatively, to offer a new chassis and body fitted with the LPG engine. By using LPG engines, the jeepneys are expected to have lower smoke emissions and thus potentially be more environment- and health-friendly. 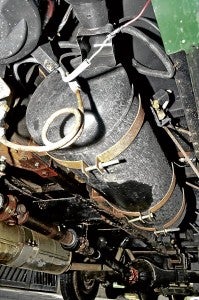 THE LPG storage tank is located under the chassis in the truck-based model.

Traditionally, jeepneys have used diesel engines. This is because diesels deliver the torque necessary to propel the heavy steel-framed vehicles as well as a full load of passengers. Correspondingly, diesel fuel is taxed less because it is used by public-utility vehicles, making the retail price cheaper despite the higher cost of the fuel itself in world markets. Shifting jeepneys from the antiquated and heavily polluting diesel engines that they are currently running to potentially cleaner gasoline engines is thus nearly impossible.

This is where LPG fuel comes in. As taxi fleet operators and owners of cars with large-displacement engine know, LPG is an alternative to diesel and gasoline, as it is cleaner-burning than gasoline, and cheaper than diesel. Although it has a higher octane rating than most gasoline variants at 102-108 RON, LPG has a lower energy density, making equivalent fuel consumption higher. Offsetting this potentially higher cost is the cheaper cost per liter of LPG. Currently, LPG is selling for about P33, while diesel is retailing for about P44.

The GoLPG jeepneys we rode in came in two versions. First is the model with the traditional jeepney body: square hood, upright windshield, long passenger compartment. Tucked under the left-hand passenger bench seat is a 57-liter LPG tank. The driver’s compartment is also typical, except for a small LED panel that indicates the amount of LPG left in the tank. The larger model, based on a truck chassis, has the tank tucked under the body. Both models can seat up to 23 passengers. The truck-chassis model has the advantage of a shorter overall length and a turning circle smaller than that of the RMS Titanic. Its engine is tucked under the tilt cab.

That engine is an inline-four DOHC 16-valve powerplant, designated a 4RB2, a derivative of Toyota’s 2RZ engine. The 2RZ is a 2.4-liter engine with a 95 mm bore and 86 mm stroke. This design lends itself to good torque delivery. The gear ratios of the transmission have been selected to optimize drivability and reportedly result in smoother delivery of power compared to the traditional diesel powertrains. “Hindi hirap,” is how our driver put it. Rated power is 136 hp and torque 217 Nm. Previously seen in applications like the Toyota Hilux and Hiace, the engine design is alive and well and being used by various vehicle manufacturers. As used in the LPG jeepney, GoLPG has recorded fuel consumption of 7.5 km/liter, with a full load of 23 passengers in city driving.

TUCKED under the red vinyl seat is an LPG tank.

The engine complies with Euro III emissions standard, while the Philippines is currently following the Euro II standard. (A jump to Euro IV is mandated for 2016.) GoLPG recorded its LPG jeepney at 83 HC (hydrocarbons) and 0.69 CO (carbon monoxide). The Philippine emissions standard requires 800 HC and less than 1 in CO. Most jeepneys apparently fail to pass these standards and yet are plying the roads, merrily pumping the air full of sweet pollutants.

The LPG jeepney faces several challenges. First is the cost of engine and transmission, estimated at P350,000. Some companies, notably Isuzu, embarked on a vehicle repowering business with mixed results. Although the individuals and companies who changed their engines met with better reliability and reduced operating expenses, the takeup was not as wide as expected. The “new look jeepney” based on the truck chassis will cost about P1 million. It will have the advantage of being built from all brand-new components, compared with the surplus parts that are used by many jeepney builders. Installation of an engine and transmission package, including testing, will take about two weeks.

AN ALTERNATIVE to the traditional jeepney body is the truck-based jeepney. It’s shorter and more maneuverable, with power steering to boot. PHOTOS BY ARNOLD ALMACEN

GoLPG will be presenting the LPG-powered jeepney to the National Federation of Transportation Cooperative, which will test the vehicle for a month. The company plans to get approval from the Department of Transportation and Communications, Department of Energy, and Department of Environment and Natural Resources, as well as bring on board financial institutions that can provide the necessary funding for the jeepney operators. The financial aspect is critical, as the initial cost is no doubt prohibitive for customers.

The jeepney has long been associated with Philippine motoring, in the way that the tuktuk has been identified with Thailand. While Thailand has been phasing out the tuktuk, not allowing new ones to take to the road, the jeepney plays a more crucial role in our local transport. Despite the presence of more efficient mass transport like light-rail trains, the final kilometers are usually traversed by jeepney. The key to keeping the jeepney alive—and us to breathe easier alongside them—is to modernize this vehicle, and the option of an efficient LPG drivetrain may be a step in the right direction.

The woman behind the decorated general