A day in the stressful life of a fund manager 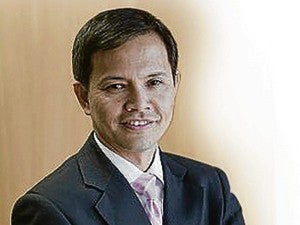 Fund manager Marvin Fausto believes in long-term investing and has raised his own kids to be the perfect poster boys of learning about stock market investing early on. After all, the chief investment officer of the country’s largest bank Banco de Oro Unibank which has P730 billion worth of assets under management—has made it his lifetime advocacy to help empower Filipinos through prudence in handling hard-earned money.

“It’s not how much you earn but how much you save and invest,” is what Fausto often tells clients, adding it’s possible for people to regularly set aside 20-30 percent of earnings, no matter how small their take home pay is.

Apart from being an esteemed fund manager serving institutions and individuals with excess money to invest, Fausto practices what he preaches in his own household. He and wife Mary Rose—likewise a financial literacy advocate and author of best-selling book “Raising Pinoy Boys”—have raised their three boys Martin, Enrique and Anton to be high-FQ (financial quotient) kids who regularly save and invest. The Fausto kids now choose their stocks, monitor and update their portfolio and discuss their investment strategy with their parents.

“It first started as gift of stocks 15 to 20 years ago. Those stocks have grown and earned cash dividends. Their cash gifts from ninongs, aunties and uncles and the savings they get out of their allowance, they put in investments,” Fausto tells the Inquirer. Whenever the kids get cash dividends, they reinvest these again.

The Fausto children have enrolled in BDO’s easy investment program (EIP) as well as opened their own stock trading accounts at COL Financial, Fausto says. EIP is a wealth build-up scheme wherein a BDO checking/savings/payroll account is enrolled under the BDO automatic debit facility and a fixed amount (with a minimum amount of P1,000) per month is deducted (once or twice a month) for immediate investment in selected BDO unit investment trust fund (UITF).

“We started them off with easy-to-understand stocks like Jollibee, Meralco and ABSCBN. These are the stocks they were familiar with. Then, they also got into Ayala Land and PLDT. They also participate in IPOs (initial public offerings) and the difference is they keep it for long term,” Fausto says.

As the boys grew, they have learned to do stock picking on their own. “Sometimes they ask me, sometimes they do it on their own,” he says. “They are financially mature.” And because these kids have made early preparations for their future, the proud dad says “they can pursue whatever field they like.”

Fausto’s eldest son, Martin 21, has graduated from college with a degree in business management and signed up with Del Monte as a brand assistant for a ketchup product. Enrique, 18, is currently studying management engineering and Anton, 15, is in third year high school.

At home, Fausto and his Ilocana wife (Ilocanos are known for being frugal) regularly save and invest 20-30 percent of their monthly earnings. Their asset allocation is as follows: 30 percent each on fixed income, real estate and equities and the remaining 10 percent in cash. In the case of their kids, 100 percent of funds are in equities.

Fausto, after all, is a disciple of legendary American investor Warren Buffet, hailed by many as the most successful investor of the 20th century. Apart from embracing Buffet’s principle of long-term investing, Fausto’s introduction of stock market investing to his kids at an early age sounds pretty much like how Buffet (based on one biography) gave stocks as gifts to his grandchildren at Christmases, thereby creating interest in the stock market among the kids.

Fausto is the youngest of the six children of a couple from Nueva Ecija. His mother was a rural banker and father, a businessman-farmer who produced rice. It was the family’s farm in Nueva Ecija that funded the Fausto children’s education.

He is one of those people with a natural affinity to Math so this Fausto exploited by taking management engineering, one of the honors program course at the Ateneo. He began his career in finance as a credit analyst at Far East Bank and it was then that he met the girl that eventually became his wife. After five years of recommending whether or not to lend, he moved to Citytrust—–then a unit of Citibank—and started managing money for corporates and individuals.

After several years, Citytrust entrusted him with managing funds for large corporates. A separate investment management unit was eventually set up in Citytrust which he headed. Citytrust’s asset management business flourished under his term. Citytrust was acquired by Bank of the Philippine Islands in 1996, which was the same year when Fausto moved to then PCIBank to head the investment business. When Equitable Bank bought PCIBank, he was put in charge of investment management in the combined entity Equitable PCI Bank and the same thing happened when Banco de Oro took over EPCI Bank in 2006.

All in all, Fausto thus has 24 solid years of experience in fund management.

Fausto, 50, says his job requires a lot of discipline and also faces a lot of stress, which is why it’s a must for him to be healthy—physically and spiritually and not just financially. He prays a lot, meditates a lot and is into athletics. He was a volleyball varsity player in high school, played badminton and was also a top-scorer in inter-bank bowling tournaments. These days, he’s running a lot. He recently participated in the Milo marathon and is training to join the New York marathon this November. He runs within their village during weekdays and joins races during weekends. He trains three to four times a week starting at 6 a.m. and finishes by 7 a.m. Running is refreshing, he says.

By 8:30-9 a.m. everyday, Fausto is at his office at BDO. He begins his day at the office reading two to three newspapers and the research reports of analysts. In the afternoons, that’s when he conducts investment meetings and company visits to understand their businesses.

His team has its own research capability but it’s part of the strategy to read others’ research inputs as well. “I believe that the way to outperform the market is to know the market first, understand how they think how they react and the way we get market information is talk to brokers, talk to market players, read the newspapers, tells you how the market thinks, then try to outperform by doing things that are not being followed, those that are not practiced,” he says.

Fausto also likes reading about behavioral investing, a new discipline on psychology, which he says helps him a lot in understanding market movements and what dictates irrational decisions and determines bandwagon. While school teaches about fundamental and perfect economics based on rationale studies, sometimes people decide differently, he says.

So what does Fausto relish most about this job? “The challenge is there and so are the rewards you get out of hard work and perseverance. There are a lot of investments. You need a lot of discipline and a lot of training. You learn a lot—learn about companies and learn about the art of investment,” he says. At the end of the day, it gives him a lot of fulfillment to generate better returns for the client, see the satisfaction of the client and later on see the benefits of investment, whether for the education of their children or future needs.

“Filipinos are naturally kind and they are helpful. The problem is they are not empowered because they don’t have enough cash and enough savings in general. What I’d really like to do is to continue to help them understand because if they can manage their own money well, then we share a better world,” Fausto says.