Agriculture progress, PPP and the mayors

After growing by 2.6 percent last year, the agriculture sector grew by 1 percent and 0.7 percent, respectively, in the first and second quarters of this year.

We believe that with better DA budget utilization through Public-Private Partnership (PPP), agriculture progress can be significantly increased.

Highlighted in the table are the areas that show low budget utilization. 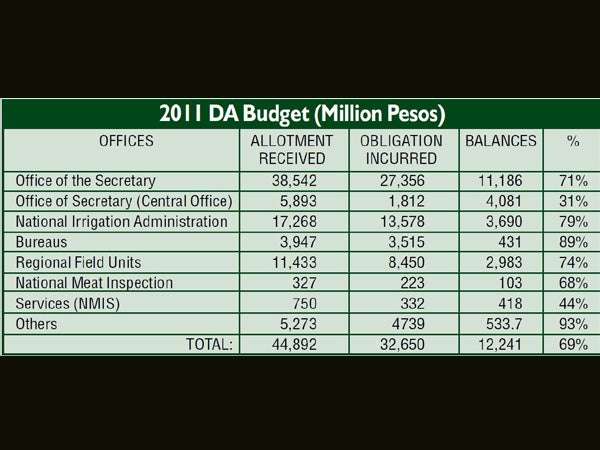 The following regions have the lowest budget utilization:

We believe PPP in the monitoring and implementation of the DA budget will significantly improve the low utilization rate.

This should be done especially in the areas and regions previously identified.

Given slow agricultural growth but fast increase in the DA budget, budget utilization must be maximized.

We do not wish the 2011 experience of not utilizing more than P10 billion in the DA budget repeated in 2013.

PPP for DA budget utilization should be harnessed through the legally mandated government-private sector Municipal Agriculture and Fishery Councils (MAFCs).

Most of them are not involved in the DA budget process.

DA should immediately allocate a significant amount of time and resources to change the mindset of the MAFCs so that they will feel responsible for helping DA budget utilization at the grassroots level.

It is argued that the major reason we have fallen behind our neighbors in agricultural development is because our agriculture extensive workers have been devolved to the local government units (LGUs).

Since DA no longer has control over them, they are often misused by unenlightened mayors for non-agriculture purposes.

Since the DA has offices only at the regional levels, it has difficulty in influencing what goes on in the municipalities.

This is where the MAFCs come in. They can help monitor and implement DA budget use. Furthermore, since they are attached to the DA, they can keep the DA regional offices informed of municipal agriculture activities (or non-activities).

DA can then allocate its agricultural resources to the municipalities based on each municipality’s performance.

In the past, DA gave little attention to the MAFCs. But with Agriculture Secretary Proceso Alcala’s commendable attention given to the rural areas, this transformation can come very quickly.

The management expertise of Secretary Mar Roxas, who may soon head the DILG, can help complete the unfinished vision of Secretary Jesse Robredo.

This is for LGUs to be the champions of agricultural development.

With Roxas’ leadership, the mayors can internalize the role given to them by the Local Government Code: It is the mayor, not the DA, who is primarily responsible for agricultural growth in his or her municipality.

In turn, the MAFCs can help the mayors through their active participation in helping monitor and implement the DA budget.

At the head office, we recommend a MOA among the DA, DILG and the National Agriculture and Fishery Council (NAFC) to promote PPP at the local levels through the MAFCs. This way, with better DA budget utilization through PPP, significant agriculture progress can be achieved.

(The author is chairman of Agriwatch, former secretary for presidential flagship programs and projects, and former undersecretary for Agriculture, and Trade and Industry. For inquiries and suggestions, e-mail [email protected] or telefax (02) 8522112.)

Read Next
Palace takes bow for PH competitiveness ranking
EDITORS' PICK
Smart reaffirms dominance as the Philippines’ fastest 5G mobile network
Patients ‘almost die’ waiting for Kalibo hospital beds to free up, says mayor
US, Indonesia commit to South China Sea defense in ‘strategic dialogue’
Why REIT investment makes sense
The vivo V21 drops its price to equip the influencer in you
Aklan gov to request for ECQ if COVID-19 cases will further increase
MOST READ
‘Hatid-sundo’ for APORs not allowed during ECQ — PNP
Pacquiao seeks PNP’s help, wants ‘forged’ PDP-Laban memo probed
‘At peace’ with effort, EJ Obiena establishes himself among PH’s greatest ever
Anxiety over paltry lockdown aid: ‘We will die of hunger’
Don't miss out on the latest news and information.