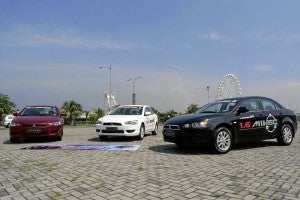 With the newly launched 1.6-liter version of the Lancer EX, Mitsubishi Motors Philippines Corp. may have finally found the right combination of what sparks Filipino interest into buying his first car, or a ride that could be a viable everyday transport.

At a price that starts at P825,000 (base model GLX), the Lancer 1.6 EX is within reach of most middle-income earners. It is also an ideal family car for five, thanks to its spacious cabin, and the fact that its new MIVEC engine could make a liter of gasoline run up to 21 kilometers.

The car’s cleaner, more contemporary exterior looks also helps. Considering the abundance of compact sedans on the market today, deciding which ones are the “best-looking” can be a very subjective exercise.

The Lancer 1.6 EX’s looks like a tuner car, and with few more tweaks, this sedan could be made to look like its cousin, the Lancer Evolution X (in fact, this is where the car’s fighter jet look—wide front grille and a shark nose hood—was based).

No wonder, MMPC is feeling ecstatic these days—sales for the compact car category reached 189 units (most of these courtesy of the Lancer 1.6 EX, which was launched in July), enabling the company to achieve a 397.4-percent sales increase—currently the highest since January.

This feat in the compact car segment enabled MMPC to sell a total of 3,275 units in July, a 15.7-percent growth when compared to 2,830 units sold in June.

And expect this number to still grow as MMPC aims to strengthen its position in the passenger car segment. The introduction of the 1.6-liter variant to the EX lineup (also composed of the 2.0-liter Lancer EX GT-A and Ralliart) is just the beginning as the company is set to introduce the all-new Mirage, a compact 1.2-liter hatch that is scheduled to arrive in October.

So far, MMPC already sold a total of 12,959 units from January to July, an impressive 31.3 percent increase for the first seven months of the year compared to the same period in 2011.

With these numbers, Mitsubishi remains to be the second-bestselling brand in the country, cornering 18 percent of the market share (a 4.6-percent improvement to the market share attained during the same period last year).

These figures were based on consolidated reports of the Chamber of Automotive Manufacturers of the Philippines Inc. and the Truck Manufacturers Association.

This same report also showed that MMPC is also doing well in the light commercial vehicles, which recorded an increase of 10.2 percent after selling a total of 3,021 units.

Other MMPC models that fared excellently include the Pajero SUV with sales seeing an increase of 56.5 percent; the Strada pickup, which is one of the company’s bestselling models, improved by 26.8 percent; the Montero Sport SUV, which remains the bestselling SUV in the country, nears the 8,000 mark as 7,863 units are already sold since the start of the year.