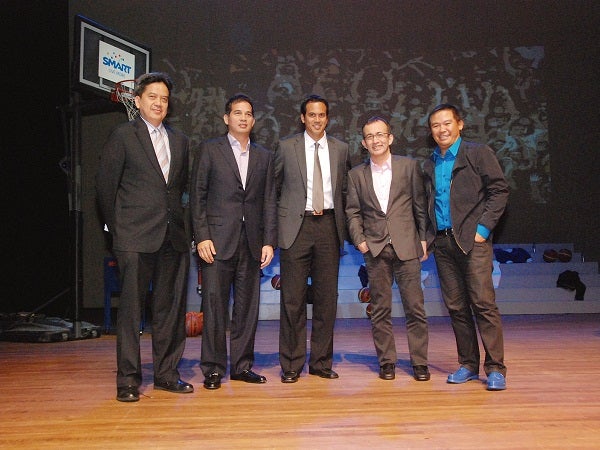 THE EVENING of July 12, 2011 was a night Miami Heat head coach Erik Spoelstra would not soon forget.

It was the end of the sixth game of a long championship series, which capped off a hard-fought season. That night, the Filipino-American’s ears were ringing with cheers, confetti was falling from the American Airlines Arena’s roof, and all around him history was being made.

Spoelstra had just fallen short of leading the Miami Heat, one of the most hyped-up teams in history, to its first National Basketball Association (NBA) championship since 2006.

For most corporate executives, life may not be nearly as exciting as chasing after basketball’s most prestigious prize, but Spoelstra said playing for NBA gold and working hard to meet a monthly sales target are not as different as they seem.

“We are all peers. We sit on the same chairs, and we make the same tough decisions,” said Spoelstra during a recent visit to Manila.

Speaking before executives of the Manuel V. Pangilinan group of companies, Spoelstra said goals may be different, but people on top mainly deal with the same challenges.

For Spoelstra, it was struggling with the pressure of being a relatively untested lieutenant being appointed to lead a battalion into war. 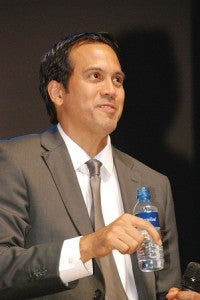 Spoelstra, who traces his roots to Laguna, replaced his mentor, the legendary coach Pat Riley, as Miami’s head coach.

On top of being one of the youngest coaches in the league, Spoelstra was also the first Asian-American to be named head coach of a major American sports team.

Unlike most NBA coaches, Spoelstra never played in the NBA and never had any head coach experience.

“When (Riley) passed on the reins to me, you can imagine the speculation in the media. They said it was an overnight opportunity, they said I didn’t look the part. They said I wasn’t ready,” he said.

Spoelstra, of course, knew that he had the tools to lead an NBA team to the top.

“I started out as an intern with the Miami Heat. Then I went to scouting, then became head of skill development, and later, was named Assistant Coach. I wore a lot of different hats that helped me prepare to be a leader,” he said.

But it certainly didn’t help that the year Spoelstra was named head coach was the same year that Miami signed LeBron James and Chris Bosh to the team’s roster.

Having to earn the trust of people who are on the outside looking in is one thing, Spoelstra said. But gaining the confidence of the very men you had to lead was a whole different ball game.

“You are never truly ready. I had to continue to prove myself and I had to earn the trust of my players,” he said. 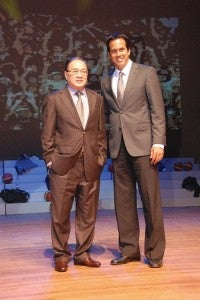 Not an easy feat for someone still getting used to being in the spotlight.

He said he made it a point to have a personal connection with every member of his team every day. Spoelstra said he didn’t just focus on the stars. He made sure that he knew everyone, even those that spent more time on the bench than on the floor.

The coach also made sure that at least once a day, he connected with his mentor and predecessor, Riley, who now serves as president of the Miami Heat. Spoelstra said even though he could run the team any way he could, he always welcomed input from Riley, even if they do not always see eye to eye.

A manager that stays in touch with his guys on the ground is something every executive should aspire to be. Spoelstra said he even tries—though he often fails—to appreciate the same music his players listen to.

Sometimes, his relationship with his players does not go well. One particular case was a shouting match on the court with Wade, one of the team’s star players.

“But these are the challenges we deal with every day. It might not be a shouting match on national TV, but it’s the same thing,” he said. “When you get through moments like that, that’s how you become a family,” he added.

He was coping with pressure from outside, and he was finally getting his players’ trust, but after falling short in 2011, Spoelstra started to doubt himself.

“I really felt that I was the reason we lost to the (Dallas Mavericks). I did so many things I regret, I did not do things I should have,” he said. Looking to get his confidence back up, Spoelstra said he “met with motivational speakers and psychologists.”

But the most important thing he did, that he said every leader should do when times get tough, was to “own” the problem. He told his players that the heartbreaking loss was his fault.

He said failing in 2011 may have been one of the best things that could have happened to him. Proof of that, of course, is something most people already know.

Almost a year after losing to the Dallas Mavericks that July evening, the Miami Heat, which was not a team led by three big stars but a family of 15 men, became NBA champions.

Spoelstra admits that he’s still a long way to becoming an NBA coaching legend like Riley, and that the pressure to prove himself doesn’t end with winning an NBA title.