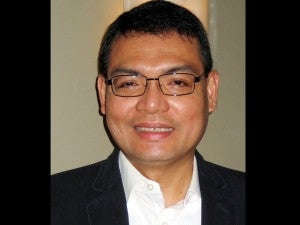 MANILA, Philippines – This pharmaceutical executive expanded the Filipino-owned United Laboratories company in Myanmar while at the same time passing all his school assignments on time.

Aristotle Dimitui, Country General Manager of United Pharmaceutical Co. which he began in Myanmar back in 1997, was also taking up a Masters degree in Business Administration at the prestigious University of Chicago Booth School of Business.

Dimitui said that his experience in the University of Chicago has helped him improve on his managerial skills in running the overseas company of United Laboratories Inc. It also expanded his network since his classmates were leaders of companies in different industries of various countries.

He said however that his return to school was not all smooth sailing, especially since he also had to run a company from scratch in a new country.

“It’s not all happiness. [There was also] A lot of pain, difficulties, challenges, conflicting time schedules, [and] how to balance work, studies and family. It [was] a very difficult situation for two years,” Dimitui said during an interview.

“A lot of discipline is required and [also] commitment. I have to keep my day job,” he added.

When he started the company in 1997 in Myanmar, he had zero revenue and was totally unknown in the country. He said this was the “double burden” of starting up a business.

“The big challenge is how to overcome that you are totally unknown, that you are a nobody among the players in the industry. That is very challenging,” Dimitui said.

The company then had to start with a very small team. Dimitui said they started with seven employees who were “hardworking, loyal and dedicated” locals.

“The advantages of having local employees [is] they know the language, the culture, they have networks in terms of markets, [and] they know how to communicate,” he said.

Dimitui said that he had to personally train and mentor the employees to build their capabilities.

“I do a lot of multitasking, in terms of managing the business operations, mentoring, finance, marketing, coaching, I was assigned as the head. I had to do everything as a general manager,” he said.

The Filipino “Bayanihan culture” was an important aspect that Dimitui brought to the company to improve the morale of the employees and to give them a sense of family and belongingness.

“[I showed myself] as part of the team. In a certain way, [I had to] really roll up [my] sleeves, stand up with people, show them a demonstration of how it should be done,” Dimitui said. He led by being an example, he said.

“With doctors, I go along with them. At the same time, there must not be a feeling or sense of superiority; more [like] colleagues,” Dimitui said. He said he made the employees feel that they were not working for him, but instead that they are working with him.

Most of the employees he hired when they first began were still with the company, he said. They now have as many as 300 employees in Myanmar, he said.

He said that he did not force the “Bayanihan culture” on the employees because he was very sensitive in respecting the local culture. “What you are doing in your home country cannot be done in other country,” he said.

He let the culture slowly develop within the employees by communicating with them and at the same time letting them see him practice it. He said the actions should be aligned with the words otherwise the employees will not believe him.

Dimitui said that it was fortunate that Myanmar has its own similar version of the “Bayanihan culture” but it had a different name. This was among the many commonalities of the people of Myanmar with the Filipinos, he said.

In 2008, Dimitui started taking up his Master of Business Administration (MBA) in University of Chicago Booth School of Business. There were 270 of them in the class from different industries and countries.

“There are a lot of difficulties, exams, lectures, doing group work, [and I] encounter diverse people [who were] also leaders in companies. [I learned] how to deal with them, and how to appreciate their strengths, because this is an international field of classmates.

He also said he was awed with the quality of their professors, many of whom were Nobel Prize winners. “It’s also a bragging right, I can say ‘oh, one of my professors one the Nobel’,” he said.

“We discuss a lot. Sometimes we end our group work early in the morning. These are all done with one thing in mind, to produce better solutions [for] a particular problem,” he said.

“Exams are tough. I make sure I review everyday. I read much more when I was in the program,” Dimitui said.

In 2010, he finished his MBA but he said what was more important was it instilled “an improved love of learning” in him and in all his classmates.

“If there is an improvement for the love to know more, whether in economics, finance, business, and management, there is potential for improvement because of that enhanced intensity to learn more,” Dimitui said.

“I think all of us did great. After the program, a lot of people wanted to pursue more in different fields in the University of Chicago,” he added.