For graduates of Isuzu-Tesda Auto Mechanic Training Center, a promise of better life 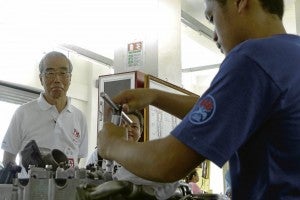 IDA (left) inspects one of the scholars during an exhibition that shows the scholar’s technical expertise. Photos by Charles E. Buban

For teenagers growing up in some of the country’s poorest towns, the life that awaits them a few years from now could be no different from what their older folks are currently experiencing: a harsh life of either farming or fishing if not peddling or becoming a household helper, lines of work that could barely feed a family.

There is not much choice as most of them are ill-equipped for high-value work. Education has been a major hindrance for the majority of these townspeople to move up the economic value chain—most of them could not even finish elementary, much more secondary level, because of poverty.

So when Rojey Garcia learned that he was selected to be one of the scholars who will undergo a free two-year training in advanced automotive mechanic course, he did not hesitate to grab such an opportunity even if this decision would mean sailing to Tacloban City, Leyte, and leaving behind his family in Palanas, Masbate.

“Some personal sacrifices may need to be made in order to break the cycle of poverty,” remembered Garcia saying to himself while promising to study hard and make the most out of this free education.

All of sacrifices of Garcia, now 19 years old, have paid off as he emerged top of his class, the second batch of scholars produced by the Isuzu Motors Limited (Japan)-funded auto-mechanic training center of the Technical Education and Skills Development Authority (Tesda) in Tacloban, Leyte.

“Words are not enough to express our gratitude to Isuzu for the support that they have given us. To my fellow graduates, never give up on what you want to do in life. It’s our time to excel. Let us show the world the best that we can be,” said Garcia during the commencement exercise that formally recognized 13 male and 16 female students as NC4-certified automotive service technicians. 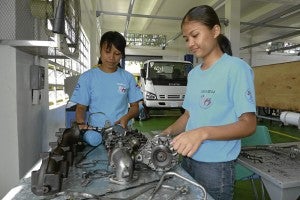 FOR a number of out-of-school youths, the chance of being included in this one-of-a-kind training course is indeed a life-changing experience.

They also got an NC2 certification in driving as well as in other aspects of car business including teamwork, customer relations and planning.

An NC4 is the highest level of certification that is offered in the country and only Isuzu-Tesda Auto Mechanic Training Center in Tacloban, Leyte, currently offers this.

These certifications enable them to have the opportunity to work at Isuzu Philippines Corp., Isuzu Auto Parts Manufacturing Corp., various Isuzu dealerships, and other local service shops and companies. Having these skills also makes them very attractive abroad.

With training modules provided by Tesda, Izuzu Motors Limited spends about P300,000 for each student, taking care of their board and lodging as well as supplying them with toiletries, textbooks and uniforms.

All scholars are required to live in a dormitory inside Tesda campus for two years.

“It has only been two and a half years since the inauguration of the Isuzu-Tesda Auto Mechanic Training Center, and we are already seeing two batches getting their chance to face the real world,” said Isuzu Motors Limited chairman Yoshinori Ida during the graduation ceremony held last May 10.

Ida added: “Considering that the members of the first batch that graduated last November are already earning a good reputation in their respective workplaces, I also expect the same for this batch. Your families and we at Isuzu are full of optimism for you.”

To date, the center has already seen 54 scholars getting actual jobs in various IPC and Isuzu-affiliated companies.

With the skills the graduates earned, IPC is even welcoming other companies to also hire the young auto technicians.

IPC president Ryoji Yamazaki explained that one of the goals of the center is to uplift the quality of automotive education in the Philippines for the benefit of the local car industry in general and not just Isuzu.

He even intimated that the graduates belonging to the second batch are expected to get employment in several bus companies, including Don Mariano, Jell Bus Transport and G-Liner.

“While it’s good that we have established this training center for the underprivileged youth, everything will go to waste if we don’t follow through and see to it that our graduates land real jobs after graduation. We really want these kids to succeed in life so in each graduation, we brought along our business partners to observe them and realize that they have world-class technicians in their midst,” Yamazaki assured.

Also, during the graduation rites, the center also welcomed the sixth and newest batch of scholars, composed of 18 students.

This brings to 67 the total number of students at the center. Batch 3, composed of 15 scholars, is scheduled to graduate this November.

The center, which opened in 2008, has Plan Philippines, a nongovernment organization that is present in impoverished communities around the Philippines, as partner to identify and screen deserving candidates.

‘Pepito’ to become tropical storm before landfall; Signal No. 1 up over parts of Luzon