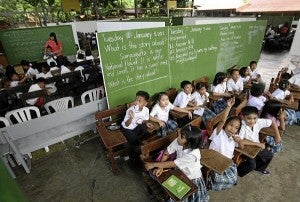 Fernando’s consortium of BF Corp. and Riverbanks Development Corp. won the build-lease-transfer contract for school infrastructure (package A) for Region 1 with an annual lease payment cost to the Department of Education (DepEd) of about P344.6 million a year for 10 years, DepEd Undersecretary Francis Varela said in an interview.

Megawide, in partnership with Citicore Investment Holdings Inc., won the school infrastructure PPP packages (A and B) for Region III and Region IV-A, respectively, with lease payments worth P523 million and P760 million per annum each year for the next 10 years, Varela said.

The winning bids were close to the maximum annual lease payment that the government was willing to pay for the school infrastructure project. The ceiling for package A was P346.3 million while the respective ceilings for packages B and C were P528 million and P768.2 million, Varela said. In total, the government had budgeted as much as P16.4 billion for the project for a 10-year period.

These figures represent the annual lease payment to be made by DepEd to the winning bidders within the next 10 years in exchange for the construction of the school buildings. The 9,301 classrooms refer to the total number of classrooms to be built within the next 16 months for the three packages.

The cost will include the building as well as the furniture and toilets as well as fixtures such as electric fans and blackboards.

Fernando’s project is thus worth P3.44 billion payable over a 10-year period involving the building of 2,157 classrooms while Megawide’s projects are worth P5.23 billion and P7.6 billion, respectively. Megawide will build 2,885 classrooms under package B and 4,259 under package C.

The project will involve the infrastructure design, financing and construction of about 9,300 one-storey and two-storey classrooms in order to supplement the current program of the Department of Education in reducing classroom backlog. By offering school infrastructure for PPP, the DepEd frees up more budget for other expenditures.

“Many are called but few are chosen” Education Secretary Armin Luistro FSC said in a statement Thursday night as he congratulated the bidders. “What was once unimaginable – closing classroom shortage – is finally within our reach. Now we can say that it is possible because we worked together and we did this for over 20 million young people, to provide them access to quality education.”

About 69 percent of the classrooms to be built are two-storey classrooms while 31 percent are single-storey units.

“We have always been at the fore of groundbreaking this (PPP) process, now we can truly push for real public-private partnership – an engagement that goes beyond a purely business venture but one that engages the rest of the nation in planting seeds of hope,” Luistro added.

Pricing in the DepEd’s cost of money if it were to spend for the building of the classrooms itself, the government expects to achieve 15 percent efficiency gain from this project. Counting in this efficiency gain, Varela said the cost per classroom and averaging the cost of one- and two-storey rooms will thus amount to about P1.1 million per room.

Varela said delivery of the classrooms was expected within the next 16 months. The DepEd, he said, would start payment as soon as 30 percent of the units were delivered.

Fernando’s group had proposed to build classrooms made of steel with floor concrete. Since the project is a lease, other costs are factored in such as maintenance costs, financing costs and taxes. The inclusion of periodic maintenance every 4.5 years aims to ensure the durability of the structures and helps extend their design life. The financing costs, on the other hand, represent the cost of using private sector money to construct the classrooms today and pay it back over a period of 10 years. Meanwhile, the DepEd has stressed that although tax payments are factored in the cost, these ultimately revert back to government as part of internal revenues.

The DepEd expects to issue the notice of award to the two bidders within the next four weeks.