Dollar strengthens on US data 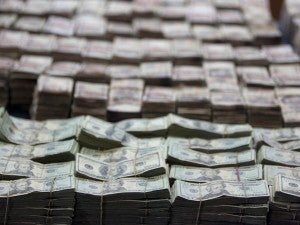 NEW YORK—The dollar rose 0.3 percent against the euro Wednesday, as US inflation and industrial production data pointed to continued but modest economic improvement.

With few European bond traders active, there was little else driving action.

The market rate on 10-year Spanish bonds eased, with yields at 6.642 percent, compared with 6.732 percent at the end of trading on Tuesday.