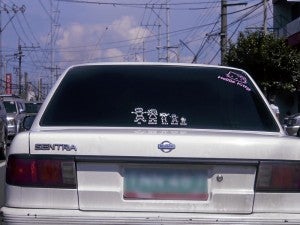 LET this stick in the mind of the motorists behind.

Before Facebook, Twitter and other online social media, there were the mudguards, side panels, windshield curtains and engine hoods. Long before the first tweet and news feed were ever entered into cyberspace, the crude letterings expressing long-standing values and witticisms were painstakingly painted on these public conveyances, to be appreciated by friend and stranger alike.

Virtually any Filipino who has earned his or her pedestrian chops in this country’s riotous streets at one point in his or her life couldn’t possibly forget these immortal lines: “Sa Luneta ang sarap, sa Maternity ang hirap”; “Basta sexy, libre”; “Basta driver, sweet lover”; “Katas ng Saudi”; “Passing side, suicide”; “Don’t get close to me, get close to God”; and “Huwag masyadong totok baka matepok.”

And who didn’t stop and stare at such wild imaginings and fantasies spray-painted on jeepney bodies? Serpents and skulls, half-humans and half-beasts, busty heroines, or muscle-bound gods seemed to entice would-be passengers that their chariot of choice had finally arrived.

So has been the Philippine streetscape for all this time. Interspersed with formal government-issued signages are the “anything-goes” populist art of the Pinoy vehicle graffiti, captured best by the jeepneys, tricycles and buses.

Underneath it all, however, vehicle graffiti seems to express the three most cherished values of drivers: family, religion and individuality. From these stem such creative, witty expressions of illustrated art, and of coping with any hardships life can hurl at them (the primary coping mechanism for Pinoys being humor). 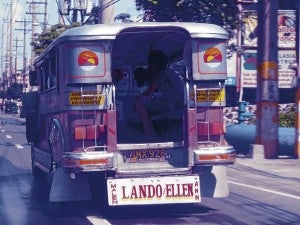 Inquirer columnist, social scientist, anthropologist and veterinarian Michael L. Tan shared with Inquirer Motoring that vehicle graffiti “is not unique to Filipinos to decorate vehicles with paintings and words. In fact, in the Indian subcontinent, trucks and buses are even more elaborately decorated than our jeepneys. But the stuff that is put on vehicles is always interesting material for sociological and anthropological analysis. They are considered important folk art, analyzed for the social messages, as well as telling us what institutions are important in a society, even values and norms. We shouldn’t forget that earlier forms of transport, from the animals themselves to the carriages (e.g. calesas) have always been decorated.”

Tan, who is also dean of the College of Social Sciences and Philosophy at UP Diliman, analyzes further: “‘Katas ng Saudi’ is common, a way of proclaiming to the world that the owner of the vehicle worked hard to save money for this business. “The stuff painted on the vehicles is important. For the Philippines, the family’s importance can be seen with jeeps having photos of the owner’s children painted on. Taxis, on the other hand, typically have the names of the wife and children.”

Jacobo observed that the “Basta sexy, libre” and “konting side view at kodakan na” are some examples of “brazen, crude but not rude” graffiti because these are “telegraphed in front of the ubiquitous altar of the Sacred Heart of Jesus with our Lady of Manaoag and matching rosary in front and near the driver as a reminder for him to be careful and also to ward off any evil or harm.” 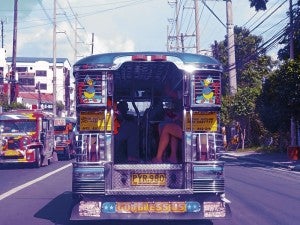 A SIGN from above for a safe journey, prosperous life. PHOTOS BY TESSA R. SALAZAR

Tan said: “Religious themes are found all the time. Again, this is not unique to the Philippines. Thai taxis are usually blessed by monks and protective inscriptions painted on the area on top of the driver’s seat.”

He added that “drivers around the world seem to recognize the risks of driving, and the need to invoke heavenly protection.”

Tan said that “on a more practical level, local drivers also have other more secular anting-anting (talisman), like carrying the calling cards of police or military officers, or getting commemorative plates of the Philippine National Police, hoping this will ward off corrupt traffic aides, who are seen as more malevolent than evil spirits.

“Note, too, how the sacred and the profane are often mixed in our vehicles. Drivers have no second thoughts about having an image of the Santo Niño on the dashboard next to a semi-nude pin-up of some starlet, or having risque and often sexist slogans painted on.

“The Filipino sense of humor is reflected in many of the graffiti, the most common being ‘Hudas not pay.’ Sometimes, though, the jokes can be quite off tangent. I never forgot one which read ‘Sa Luneta ang sarap, sa maternity ang hirap’. . . the drivers at least recognize the need for reproductive health information!” quipped Tan.

A website called The Colorful Philippines (colorfulphilippines.com) features an article titled “The Philippine Jeepney—King of the Road.” It describes vehicle graffiti as such: “The stickers emblazoned in the metallic body of this automotive monster range from the image of the Virgin Mother, a beer bottle, an image of Michael Jordan, to a representation of the Martians invading the Earth. If you see American walls full of grafitti, call the graffiti in a Philippine jeepney as informal art—graffiti on wheels.”

Godofredo Umali Stuart of stuartxchange.org describes jeepney art as “rare pieces of metalworks, strutting design and screaming attitude. They deserve a smile, a nod, or a thumbs-up.”

And appreciating these moving works of art is virtually free, until you decide to flag down one and ride it.