MANILA, Philippines—This isn’t about toilet humor. But it does involve a dirty toilet.

“In my elementary school, the restrooms were, to say the least, ill-maintained and ill-equipped. Feces were splattered over the cracked tiles, and water barely spewed out of the broken faucets,” says Napoleon Co, owner of Home Depot, a successful home and construction superstore chain.

Co admitted that, in those days, he would hold off answering nature’s call until he got home—an unfortunate habit he found hard to break while studying in provincial schools in Cebu. This led to health problems later in Co’s life. 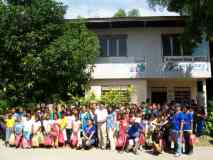 A-BOOK-SAYA members pose with the children who frequent the Kristiyano-Islam (KRIS) Peace Library in Zamboanga City.

But the ordeal merely challenged the young Co. Knowing how it was to be deprived of proper hygiene and sanitation, he vowed never to let his children experience the same thing.

Moreover, the reality of poverty struck him hard.

“If you ask me why I got into this business, I would say the toilets jump-started the vision. I was moved, through this painful experience, to help poor people out there who have had it harder than I did,” Co says. “I know how dehumanizing it feels to relieve yourself in the dirtiest of these places.”

In the family business, Co found the vehicle to transform his vision into reality. The family runs a quaint hardware shop in Cebu, selling tiles, bathroom tools and materials. Through effective management, investment, and lots of determination, the family business bloomed into Home Depot.

With five branches in Metro Manila, Home Depot has provided for virtually every construction need, from ceramic toilets and vinyl tiles to outdoor lighting. Locally, the superstores are frequented by both rich and poor for their one-stop construction products.

Staying true to his promise, he has committed Home Depot to charity by regularly offering free construction materials and services to poor families and schools. Close to his heart, and his childhood, is his particular advocacy of building toilets for public schools in Cebu, Payatas and recently in Zamboanga.

ABSG, a peace and literacy group advocating education in war-torn areas in Mindanao, was hard-pressed in soliciting funds to build a restroom at the KRIS Library. This is where Co comes in and his help has been invaluable for the group.

“I had read that the kids who visited KRIS either did what they needed to do in the bamboo trees behind the library or—just like me—withheld the need until they got home,” says Co, who met with ABSG and KRIS founder Armand Dean Nocum, a public relations executive and former Inquirer reporter.

The meeting was arranged by Teresita Ang See, founding president of Kaisa Para Sa Kaunlaran Inc., an organization of Chinese-Filipinos actively promoting the integration of the ethnic Chinese into mainstream Philippine society.

In December, Co sent to Mindanao toilet bowls and construction materials for the building of three restrooms in the KRIS Library after learning that although the two-story library was constructed in 2009, it operated without restrooms.

Nocum welcomed Co’s help, saying that KRIS scholars and poor Muslims and Christian kids who would take free computer lessons and take catch-up reading lessons in the library would no longer need to worry about dirty toilets.

“It’s a small thing—to be able to build a clean toilet for a kid. But it is no insignificant thing to promote the health of a child—and ultimately, his growth and development, and his good future,” Co says.