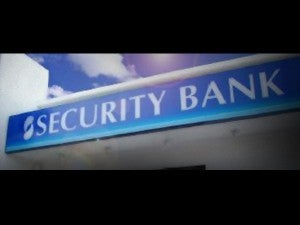 In a press statement, Security Bank said its offering of long-term negotiable certificates of deposit (LTNCDs) with a seven-year tenor was priced at 5.5 percent per annum.

The offer will run until August 8 while target issue date is August 15.

Deutsche Bank and Standard Chartered act as lead arrangers for this new offering of LTNCDs, which marked a reopening of another P5-billion LTNCD issue that was completed last February.

LTNCDs are time deposits but have longer maturity and carry higher yields. While they cannot be pre-terminated unlike regular time deposits, they are negotiable so they can be sold in the secondary market to other investors. By using the LTNCD structure, which is tax-free because of the long tenor, banks can offer better yields to clients.

This fund-raising, the bank said, was in anticipation of a surge in credit demand.

In the first semester of the year, Security Bank grew its loan book by 29 percent year-on-year to due to expansion in lending to infrastructure, mining energy and real estate. As such, asset base increased by 11 percent to P235 billion from the same period last year.

But while expanding its earning assets, Security Bank likewise widened its funding base through a 26-percent increase in deposit base to P131 billion during the period.

Security Bank ended June with one of the lowest ratios of non-performing loans to total loans in the industry at 1.1 percent. Capital adequacy ratio stood at 18.2 percent.

Security Bank chief finance officer Joselito Mape said the bank was in the “initial stages of investment phase” with the expansion in branch network and acquisition of Security Bank Savings. It has opened 10 out of 50 planned new branches in areas restricted by the Bangko Sentral ng Pilipinas in the first semester.

The LTNCDs will be issued at par and at a minimum denomination of P10,000. The minimum initial investment size is P50,000.

When Security Bank first issued P5-billion seven-year LTNCDs last February, it marked a milestone in local banking. Before that issue, most LTNCD offerings by banks in the country had a tenor of a little over five years.

With the issuance of LTNCDs, Security Bank will be able to expand its deposit base and strengthen its balance sheet by stretching out liabilities in its books. As the LTNCDs form part of a bank’s deposits, they are insured with the Philippine Deposit Insurance Corp.