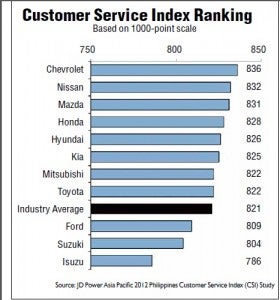 American business author and Fortune 500 companies adviser Michael LeBoeuf once said that “a satisfied customer is the best business strategy of all.”

It seems that Philippine car companies are following this adage with highly concrete results, as overall satisfaction with authorized dealer customer service in the Philippines has increased by 25 points compared with last year’s, to 821 on a 1,000-point scale, according to the JD Power Asia Pacific 2012 Philippines Customer Service Index (CSI) study released recently.

Now in its 12th year, the study focuses on five factors considered as key contributions to overall satisfaction of vehicle owners who visit an authorized service center for maintenance or repair work during the first 12 to 24 months of ownership. These are (in order of importance) service quality, vehicle pick-up, service initiation, service advisor and service facility.

Based on the recent results, Chevrolet ranked highest again for the second consecutive year with an overall index score of 836, obtaining strong results in the service quality and service advisor factors. It is followed by Nissan with an index score of 832, which was narrowly tailed by Mazda with 831 index points. Nissan’s results showed very well in the vehicle pick-up segment while Mazda performed well in the service initiation and service facility segment. A total of 11 brands were ranked in the 2012 study with the following brands showing most improvements: Mitsubishi improved by 40 index points, Hyundai by 37 index points and Honda by 35 points.

“Customer satisfaction with automakers in the Philippines is increasing, and they are working together with their dealer networks toward delivering a better service experience to their customers,” said Mohit Arora, executive director at JD Power Asia Pacific, Singapore. “This materializes in a growing proportion of customers who are ‘delighted’ and ‘pleased’ with the after-sales service experience at authorized vehicle service centers, 83 percent combined. In parallel, overall satisfaction with vehicle quality has improved, which is supported by several new product launches in recent years.”

He added: “Service customers are particularly sensitive about the transparency of the service, notably through receiving accurate cost estimates and how well dealerships are meeting their initial commitments before service begins. In 2012, 82 percent of customers received cost estimates, which is the lowest rate in the past five years, making this a critical-to-satisfaction area in which dealers may need to pay greater attention going forward.”

JD Power’s five offices in Asia bring the language of customer satisfaction to consumers and businesses in eight key markets in the region.