Stocks up on BSP rate cut 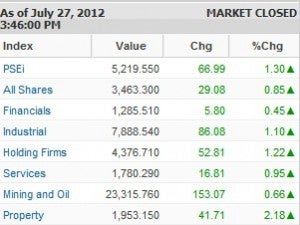 After a sluggish start this week, the PSEi reversed early losses and even ended slightly higher than last week’s close of 5,210.89.

All counters were up, but the sharpest gain was posted by the interest rate-sensitive property index, which jumped 2.18 percent. Volume for the day rose to P8 billion. There were 87 advancers that overwhelmed 59 decliners while 44 stocks were unchanged.

Risk appetite across global markets was perked up by a statement from the ECB that it would defend the euro zone. Overnight, the Dow Jones industrial index surged 1.67 percent to 12,887.93 while regional markets were likewise mostly higher.

“The move was unexpected because there is little sign of the Philippine economy being drawn into any global slowdown. [It] may have been a response to recent capital flows,” DA Market Securities said in its daily commentary.

Prior to the rate reduction, the BSP prohibited foreign funds from investing in its high-yielding special deposit accounts (SDAs) and also trimmed the interest rates on the SDAs to make these less attractive to carry trades, or those borrowing from low-interest rate markets to invest in higher-yielding markets.