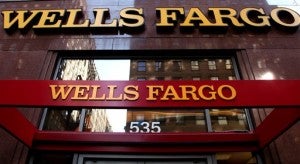 In this May 6, 2012, photo, a Wells Fargo sign is displayed at a branch in New York. Wells Fargo is reporting higher earnings for the second quarter thanks to a pickup in lending and a decline in the amount of bad loans, according to reports Friday, July 13, 2012. (AP Photo/CX Matiash)

It’s just that nobody was paying all that much attention.

The spotlight instead was on JPMorgan Chase, where executives fielded questions about a giant $5.8 billion trading loss, which surprised investors when it was announced in May and has only become more troublesome as estimates about the scope of the problem have grown.

Then again, that’s the way Wells Fargo usually works: Getting ahead by staying under the radar.

The comparison was not lost on Wells Fargo’s chief financial officer, Tim Sloan.

“It’s not that we don’t make mistakes,” he said in an interview with The Associated Press. “But we don’t take on a risk and then decide that the way we get comfortable with it is by hedging it. We just don’t do it in the first place.”

The bank, based in San Francisco far from its New York peers, was considered a large regional bank until the end of 2008, when it stepped onto the national scene by scooping up Wachovia, a major bank in the South that was teetering on the brink of collapse.

Wells Fargo has since staked its reputation on mortgages, churning out more loans than any other bank. It’s fond of pointing out that, at least compared to peers, it relies more on plain-vanilla customer lending rather than investment banking services that can carry big profits but also big risk. It’s now the biggest U.S bank by market value, a crown it took from JPMorgan.

When Moody’s downgraded the ratings of most of the major banks last month, Wells Fargo escaped intact. In recent weeks, as industry analysts cut their estimates for most other big banks, they raised them slightly for Wells Fargo.

In a call with analysts, Wells Fargo executives highlighted how the bank had expanded lending and curbed the proportion of bad loans.

Net income rose 18 percent to $4.4 billion, compared with $3.7 billion in the same period a year ago.

On a per-share basis, the bank earned 82 cents, in line with estimates of analysts polled by FactSet. Revenue rose 4 percent to $21.3 billion, also in line with analysts’ expectations.

Mortgage originations more than doubled, to $131 billion from $64 billion. About 16 percent came from the government’s Home Affordable Refinance Program, or HARP. The trade publication Inside Mortgage Finance estimates that Wells Fargo controls 34 percent of mortgage lending in the U.S. The runner-up, JPMorgan Chase, controls 11 percent.

That strategy has driven revenue higher, but it has also brought headaches. Thursday, for example, the bank agreed to settle Department of Justice charges that it had discriminated against African-American and Hispanic borrowers by steering them into expensive mortgages. The bank denied the charges but said it wanted to get the matter behind it.

The mortgage-heavy strategy also makes the bank vulnerable to mortgage-repurchase costs. Wells and other banks have been buying back soured mortgages from investors who bought them before the financial crisis and now say they were misled about their quality. Wells Fargo said it added $669 million for mortgage repurchases, compared with $242 million a year ago, mostly because it expects more demands from the government-sponsored agencies Fannie Mae and Freddie Mac.

Sloan, the CFO, warned that the build-up might continue. But he and CEO John Stumpf also said the bank would review claims carefully, and wouldn’t buy back mortgages just because investors demanded it. “We are going to push back,” Stumpf said.

Total lending increased, including commercial and industrial loans. The bank had a record amount of mortgage applications.

Fees that the bank charged on credit and debit cards fell 30 percent, partly because of new federal laws that restrict how much banks can charge. The bank also added to reserves for potential losses in the unit that caters to businesses. Assets in the wealth management division fell, and revenue from the brokerage fell. Gains from trading and stock investments fell.

The bank is also cutting expenses. It eliminated about 2,200 jobs, or 1 percent of its work force compared to a year ago. Salaries rose 3 percent, though employee benefits declined 10 percent. The bank cut spending on equipment, postage and advertising, though travel and entertainment increased.