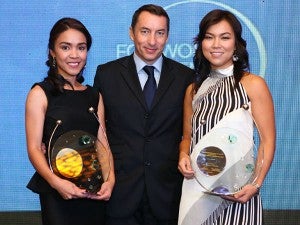 MANILA, Philippines— Science can’t get any hotter than this. With fellowship grants worth P400,000 each, two young Filipina scientists have bagged the 2011 For Women in Science (FWIS) L’oreal-Unesco fellowships after a grueling judging process headed by the first Filipino FWIS Asean Laureate, Prof. Lourdes Cruz.

The lucky FWIS fellows, Dr. Ma. Cecilia Conaco and Dr. Aletta Yñiguez, will use their prize money to aid their research.

Conaco, a 34-year-old Balik-Scientist who is also a post-doctoral researcher at the Neuroscience Research Institute in the University of California, received the grant for her research proposal entitled “Dynamic Gene Regulation in Marine Sponges.” With her research, Conaco aims to identify and sequence genes from sponges and use these to better understand how the organisms monitor and adapt to changes in its environment.

Conaco describes sponges as the oldest, very special, economically and ecologically important marine organisms. She said that because of the changes they undergo during their different stages in their life cycles, sponges have become physiologically and chemically complex.

She said that her strategy is to use recently developed sequencing techniques to identify and measure the sponges’ genes—“a gold mine that we can look at to better understand how to better protect marine organisms.”

“We hope that by studying how the sponges’ genes are used during each of these different stages, we’ll be able to contribute to the improvement of methods for resource monitoring and conservation. Because when you know which genes change the most in response to environmental changes, then we can design better ways of monitoring the health and condition of our marine organisms,” Conaco said.

Conaco said that she also aims to study sponges’ genes that are involved in chemical production, saying that sponges are known to be drugstores or pharmacies of the oceans because they make so many different kinds of chemicals.

“The identification of sponges’ genes involved in the production of useful substances will also help to design better ways of producing drugs or synthesizing different types of materials that will be useful for all,” Conaco said.

Conaco shared that she found “promising” and interesting genes in her sequencing of an Australian sponge during her post-doctoral training. She hopes to take her studies further by looking into indigenous Philippine sponges. With the grant, she plans to focus on the amphimedon, a blue sponge that can be found in Bolinao, Pangasinan.

She said that sequencing genes is a really expensive undertaking so she is collaborating with other groups, particularly the University of the Philippines Marine Science Institute (UP MSI).

Yñiguez, an assistant professor at the UP MSI, received the grant for her proposal entitled “Enhancing robustness of plankton models and monitoring systems by understanding fine-scale biophysical processes.” She said that she aimed to better understand how phytoplankton contribute to production of fisheries or turn into harmful algal blooms (HABS).

She described phytoplankton as the bases of the marine food chain that “ultimately leads to the productive fisheries that many in our country rely on for their livelihood.” But, she cautioned, there were many circumstances that led these microscopic plants to become harmful to us and that’s what you call the harmful algal blooms.

She described HABS as genetic term for the phenomenon leading to red tide or fishkill. She said that these HABS cause poisoning, fatalities and economic losses for the country.

Yñiguez said that her project aimed to compare changes in the phytoplankton types and the environmental conditions accompanying those types in two areas: the productive fisheries area—where there are no HABS—and the HABS site.

“So we are trying to figure out what are the mechanisms going on as the different phytoplankton types are changing in two different sites but one is leading to HABS and one is actually a productive fisheries area,” she said, adding that the first site would be the Lamon Bay in Bicol, a productive fisheries area. The other site would be the Sorsogon Bay, which she said has been experiencing red tide for several years and has been the subject of shellfish bans.

Yñiguez said that the information she would get would then be used to help validate and increase the reliability of real-time monitoring platforms and remotely sensed data that would be part of a bloom forecasting system in target sites in the country.

“We’re developing computer models so we’re taking that knowledge that we would obtain from this project and other complimentary projects to develop robust computer projects that can be used for management and mitigation of harmful algal blooms,” she said.

Conaco and Yñiguez shared positive outlooks for women scientists in the Philippines, saying that there are very “promising” opportunities for women to explore the field of science.

“It’s a very exciting time to be in science because things are moving so fast and it’s no longer a solitary effort so I think there’s really a lot of room for women to come in and pursue what they’re passionate about,” Conaco said.

Both also shared that finding funding and support for science projects has always been a problem for the industry, not only here in the Philippines but also abroad

“It’s always competitive to find means to get funding but I don’t think there is an unequal or unfair gendered bias. You just need to encourage from the start that women enter the scientific field and I think if they do well and build their track record in what they do, they will eventually find funding for their projects,” Yñiguez said.

Conaco and Yñiguez also said that the country need to pay attention to encouraging and giving support to the younger generation of scientists, proposing to open the search to high school students who they described as “very enthusiastic and curious” people.

“I believe we have a very strong female community of scientists in the Philippines but it’s really getting the young ones to keep going with research and I think that’s where we really need to focus on,” Conaco said.

Yñiguez echoed Conaco, saying: “It’s a great idea to push FWIS even further down to the high school level because if we start giving that kind of encouragement to young girls, and start nurturing that seed and push them to pursue careers in science, then we would have more scientists who could contribute to the country.”

L’oreal Philippines, in partnership with Unesco and the Department of Science and Technology, launched FWIS National Fellowships-Philippines In 2010. The program aims to empower and promote excellence among women scientists by recognizing their achievements and rewarding them with grants. FWIS accepted research proposals related to the Life and Material Sciences from applicants who held or pursued Master’s or PhD degree in any field of science and were not more than 45 years old.

“FWIS is one of the strongest programs L’oreal has globally today, mainly because it values key components in our company DNA—science and women. Through this program, we have been able to create a community of women who move science forward in the hopes of making the world a better place,” Luc Oliver-Marquet, managing director of L’oreal Philippines, said at a press conference and awarding ceremony held at the EDSA Shangri-La Hotel on July 3.

Christian Cayaba, scientific and technico-regulatory affairs manager at L’Oreal Philippines, for his part, said that they decided to reduce the age bracket limit from 45 years to 35 years old in 2011 to open the search for younger women scientists. Conaco and Yñiguez were chosen after judging by a jury chaired by Prof. Lourdes Cruz, the first Filipino and first Asean Laureate of the FWIS L’oreal-Unesco Awards.

Cayaba said, “FWIS is not just about identifying exceptional women and giving them rewards. There’s also a sustainable effort because when you identify an exceptional woman then a lot of young women would look up to them so they will serve as new models.”

Meanwhile, FWIS continues its search for the next FWIS National Fellows as it accepts research proposals related to the life and material sciences from applicants who hold or are currently pursuing Master’s or PhD degrees in any field of life and material science and who are not more than 45 years old. Two fellowship grants worth P400,000 each will be given to the two who will be chosen by the jury composed of representatives from L’Oreal Philippines, Unesco and DoST. Deadline for submission is  March 2013.