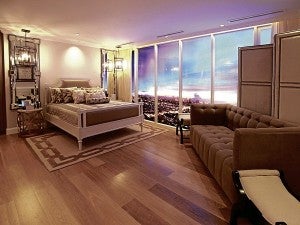 The Philippine real estate market is experiencing a different kind of storm.

As if the proliferation of residential buildings and communities that have continuously reshaped skylines and landscapes were not enough, local real estate developers have begun upping the ante to redefine the term “quality living.”

For instance: whereas globally renowned personalities and brands like Trump, Versace and Missoni were reserved before for the ultra elite, gamechanger Century Properties Group Inc. was able to bring in the country and into its developments these coveted stamps to provide more Filipinos a chance to a sophisticated yet quality way of living.

But more than just the name and the endorsements, the arrival of brothers Donald Jr. and Eric more importantly signifies a vote of confidence in the country’s capacity to be at par with the rest of the world, and also marks Trump’s affirmation of the development’s significance in this part of the globe.

“The fact that a Trump-branded development is rising in the Philippines is a testament to the increased confidence of the international sector in our country’s potential to become a world-class destination,” noted Century Properties managing director and Trump Tower Manila project head Robbie Antonio. 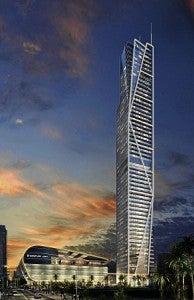 TRUMP TOWER Manila highlights the optimistic outlook of the international property sector in the Philippines. Photo by RICHARD A. REYES

“As a standard bearer of excellence in residential living, Trump Tower Manila also positions the Philippines as the ideal place of residence for global citizens,” Antonio added.

Announced in September 2011, Trump Tower Manila is a 56-story residential development that is owned and developed by Century City Development Corp., a member of Century Properties Group Inc., with the brand name and mark under license from the New York-based Trump.

Trump Tower Manila, which will be delivered by 2016, is said to be a huge undertaking that is perceived by many as a milestone as it highlights the optimistic outlook of the international property sector in the Philippines.

The Philippines, indeed, is lucky to have the Trump Tower, heralded as the newest addition to this illustrious roster of Trump-branded developments and the first to be erected in Asia in this decade.

Trump Tower Manila will be built within Century City, a 3.4-hectare masterplanned property on Kalayaan Avenue, Makati City, which will be comprised of luxury residential towers, a medical-IT building, offices and a retail center.

It was only in March this year that the Trump Tower Manila showroom in Makati was opened to the public on an appointment basis. A month later, the project has already garnered two highly coveted Asia Pacific Property Awards in Kuala Lumpur, Malaysia: the Best Residential High-rise and the Best High-rise Architecture titles in the Philippines category.

So it is not at all surprising that by early May, Century Properties reported that 67 percent of the more than 220-unit residential tower has been sold.

“We are overwhelmed with the tremendous success of this project in such a short time. Trump Tower Manila has already received accolades even prior to breaking ground which is an incredible accomplishment further showcasing the strength of the local market and its increasing demand in the ownership of luxury real estate,” noted Eric Trump. 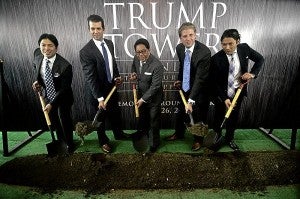 And like all Century Property developments, the project’s inaugural included a well-attended press briefing with the local and international media, a groundbreaking ceremony and an evening reception exclusive to the owners and investors of the project.

Also part of the Trumps’ itinerary was a visit to a scheduled medical mission in Manila by Operation Smile Philippines, a nonprofit organization that conducts surgeries for children with cleft lip and cleft palette deformities.

Eric Trump, for his part, is the active founder of the Eric Trump Foundation, a charity organization dedicated to improving the lives of children battling debilitating medical conditions.

Similar to the previous events organized by Century Properties, Operation Smile Philippines is the beneficiary this year of several Trump Tower Manila functions that are intended to raise funds for the organization’s 30th Anniversary Missions in November and December.

“The Trump Tower Manila event is a celebration of the project’s success, the market’s phenomenal reception to the property and the arrival of the Trump brand to the Philippines. We honor this occasion by giving back to the children of Operation Smile,” the older Antonio shared.