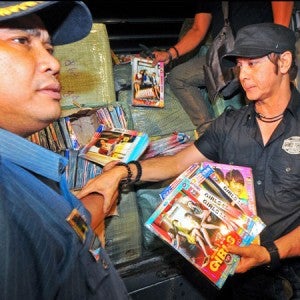 MANILA, Philippines – Film piracy in the Philippines is nearly eradicated, thanks to the collaborative efforts of government agencies and film organizations implementing the 2010 Anti-Camcording Law, an international film association said in a statement Thursday.

“The illegal replication and distribution of audiovisual materials via illegal camcording in our cinemas had almost killed the film industry and [had a negative impact on] the country’s economy in terms of lost revenue and jobs,” Dominic Du, Motion Picture Anti-Film Piracy Council (MPAFPC) President, said in a statement released by the international Motion Picture Association (MPA).

A recent study conducted by the MPAFPC showed there was a 95 percent decrease in the incidents of camcording.

“In 2011, only one illegal camcording of a movie produced by Hollywood studios was forensically matched to the Philippines, compared to 20 in 2010 and 22 in 2009,” MPA said.

“The Anti-Camcording Law has helped to revive the film industry and improve the confidence of local and international filmmakers and studios alike,” Du said.

Records of the MPAFPC also showed that 96 individuals have been sanctioned after being caught using recording devices inside exhibition facilities, five arrests were made and those arrested are undergoing due legal process, MPA said.

“Because of this important piece of legislation, we are very close to eradicating film piracy in the Philippines but more still needs to be done to protect locally produced movie titles as most of these are camcorded,” Du added.

Intellectual Property Office (IPO) Director General Ric Blancaflor said that the Anti-Camcording Law was effectively implemented through the collaborative efforts of both the public and private sectors.

“[Through the] efforts of the Department of Justice, the National Bureau for Investigation, the Philippine National Police, the IPO and the Optical Media Board, we were able to [quickly impose] sanctions [to] offenders; thereby sending a strong message that illegal camcording is not tolerated and is a crime punishable [by] a severe fine and lengthy imprisonment,” Blancaflor said.

Cinemas have placed measures against illegal camcording such as “covert and overt security, profiling and monitoring of known members of camcording syndicates, Closed-Circuit Television (CCTV) cameras, the use of night vision goggles, as well as additional security measures for major [film] releases and throughout the annual Metro Manila Film Festival,” MPA said.

Trailers portraying a person being caught while illegally camcording a film are being shown in many cinemas nationwide to effectively warn people of the penalties of illegal camcording, it said.