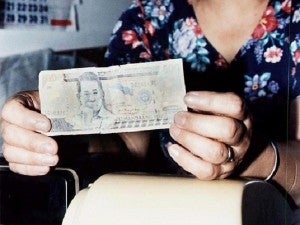 DIGOS CITY, Philippines—Without admitting the money was fake, a Banco de Oro branch in Digos City recently replaced a P1,000 bill a depositor had withdrawn from the bank’s automated teller machine, after a cashier at a nearby department store rejected the bill on grounds it was bogus.

Police in Digos, capital of Davao del Sur, are now investigting how the bill found its way into the BDO automated teller machine.

The account of Niel Alegarbes, 27, begins when he withdrew P4,500 from a BDO ATM here on Tuesday before proceeding to a department store just a few meters away.

After buying his needs, he went to the store’s cashier and casually handed a P1,000 bill from the wad of bills he got from the ATM, only to be told it was fake.

Horrified, Alegarbes said, he went back to the bank where he got the bill and was relieved when it was replaced.

BDO officials, however, did not admit the bill was fake. But Cynthia Sabandal Intang, a BDO cashier, said they agreed to take the money back because Alegarbes was a regular customer and the bank’s closed-cricuit television indeed showed him withdrawing money from its ATM.

Supt. Solomon de Castilla, Digos City police chief, said they were investigating to see if the money really was fake and how it found its way to the bank’s ATM, considering that banks use stringent methods in handling money.