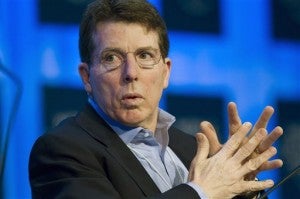 In this Wednesday, Jan. 27, 2010, file photo Bob Diamond, Chief Executive of Barclays, listens during a plenary session on the first day of the 40th Annual Meeting of the World Economic Forum, WEF, in Davos, Switzerland. Diamond has resigned with immediate effect, the latest scalp of a financial markets scandal that has also cost the job of the chairman. The bank said Tuesday July 3, 2012, that outgoing-chairman Marcus Agius would lead the search for Diamond's replacement. AP PHOTO/KEYSTONE/LAURENT GILLIERON

LONDON—Barclays Chief Executive Bob Diamond quit his job Tuesday, the biggest scalp in a financial markets scandal that has also seen the chairman announce his intention to resign and sown the seeds for another investigation into Britain’s banking sector.

The resignations, which took effect immediately, come a day after Chairman Marcus Agius fell on his sword, too. However, Agius will leave the company only after a new chairman is found and will lead the search for a new chief executive. He will take on Diamond’s responsibilities until a new CEO is appointed.

Barclays’ management has come under fire since the bank was fined $453 million last week by US and British regulators for submitting false reports on interbank borrowing rates between 2005 and 2009. Much of that activity originated from traders in Barclays Capital, the investment banking division which Diamond headed at the time.

“The external pressure placed on Barclays has reached a level that risks damaging the franchise — I cannot let that happen,” Diamond said Tuesday in the statement accompanying his resignation. “I am deeply disappointed that the impression created by the events announced last week about what Barclays and its people stand for could not be further from the truth.”

Britain’s Serious Fraud Office said Monday that it would decide within a month whether to pursue criminal charges in the case. The government, which has come under pressure to initiate a judge-led inquiry into the sector, also announced a parliamentary committee to investigate what went on and report by the end of the year.

Barclays’ share price was up 1.2 percent at 170.4 pence in midafternoon London trading, retreating from earlier highs.

“Although Diamond’s resignation should take some of the ferocity out of the intense criticism heaped on Barclays, there is little doubt that the risk of holding the stock has risen substantially in recent days,” said Nic Clarke, an analyst at Charles Stanley. “A cloud is likely to hang over the stock until a suitable successor is chosen.”

As well as facing intense media pressure over the past few days, Diamond has seen growing calls for his resignation from the political world. Both Deputy Prime Minister Nick Clegg and opposition Labour Party leader Ed Miliband had called for Diamond, a 60-year-old American, to stand down.

The bank said Agius, 65, would become full-time executive chairman until a new CEO is appointed.

“Clearly there’s a lot more to come from this story right across the sector, but that’s a significant scalp to be taken at this stage and now leaves a looming succession issue for the bank,” said Mike McCudden, head of derivatives at Interactive Investor.

Some analysts had thought Diamond’s position was secure because there was no obvious successor in the wings.

Diamond said he still intended to face the House of Commons Treasury Committee on Wednesday to give the bank’s explanation for the false interest rate reports.

Barclays is one of a number of banks that regularly submit estimates of what it will cost them to borrow from other banks. These estimates feed into a calculation of the London interbank offered rate (LIBOR) which is used to determine payments from a range of financial contracts.

The London rate, and the related European interbank offered rate, are the benchmarks for over $500 trillion in global contracts, including loans and mortgages.

Barclays admitted that it had submitted lower than actual figures on its interbank borrowing during the credit crisis in 2007 and 2008. Several other global banks are being investigated in other countries for similar actions. Scotland said it was conducting a criminal investigation of the banking sector, without specifying which companies.

Last week, Diamond announced that he, Del Missier, Barclays Capital chief Rich Ricci and Group Finance Director Chris Lucas were waiving any bonuses for 2012, accepting their responsibility because of the rate scandal.

The financial terms of Diamond’s departure were not immediately disclosed.

Despite the growing calls for him to step down, Diamond’s resignation came as a surprise.

On Monday, he sounded like a man determined to keep his job. In a memo to staff, he said he was disappointed by the misbehavior that led to the massive fines, but said: “It is my responsibility to make sure that it cannot happen again.”

Diamond built up Barclays Capital into a profit-spinning powerhouse, and scored an important coup during the financial crisis by buying the remains of Lehman Brothers US operations in a $1.35 billion deal.

Barclays survived the credit crisis without resorting to the kind of taxpayer bailout, which saved Lloyds Banking Group and Royal Bank of Scotland, relying instead on an injection of capital from Qatar Holding, the government-backed investment fund.

In January last year, Diamond memorably told a House of Commons committee: “There was a period of remorse and apology for banks. I think that period is over.”

Del Missier, 50, a native of Canada, had been co-chief executive with Ricci in running Barclays Capital after Diamond moved up to CEO.

Del Missier joined Barclays in 1997, and was appointed to the newly created role of chief operating officer on June 22.

He gave no reason for his departure in the statement released by the bank.