Changing of guard: From Cojuangco to his anointed | Inquirer Business
Close
menu
search

Changing of guard: From Cojuangco to his anointed 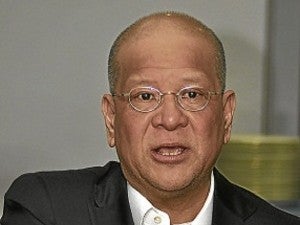 MANILA, Philippines—It was not so much a changing of the guard as the passing of the mantle of leadership to an anointed successor.

Businessman Eduardo Cojuangco Jr. has sold his stake in San Miguel Corp. (SMC) to a group of trusted allies led by SMC president Ramon S. Ang for P37 billion, but will keep his post as chair and CEO of the country’s most diversified conglomerate.

“There is no other person deserving of this opportunity to control a significant stake in the company that is so close to my heart than Ramon. San Miguel has made a distinctive impact because of him and he cares about the company and its people. I am confident he will lead San Miguel to further greatness,” Cojuangco said.

As Top Frontier chose not to buy the entire bloc, Cojuangco assigned the rest of the shares to Ang, making Ang the single biggest individual stakeholder in SMC with an 11-percent stake.

The deal will give Ang control of three of the company’s 15 board seats but the 77-year-old Cojuangco, who was able to return as chair and CEO during the Estrada administration in 1998, will remain at the helm of the conglomerate.

Cojuangco will sit as chair of SMC “for life,” Ang said in a text message.

Based on the outstanding number of SMC shares, the Cojuangco bloc had a 15-percent interest in SMC equivalent to 20.8 percent of voting rights.

In a press statement yesterday, Cojuangco said he sold his 11-percent stake to Ang, whom he described as “a person in whom I have full trust and confidence and rightfully deserves utmost recognition for transforming the company into a highly diversified and profitable business conglomerate.”

“From the time I requested Ramon to join me in the company, he has continuously dedicated 100 percent of his time and effort in ensuring the growth of the San Miguel Group to the benefit of its shareholders,” he said.

Ang said he bought the shares from Cojuangco on “new and friendly terms.”

The sale was consummated yesterday via cross transactions on the Philippine Stock Exchange, meaning the ownership of the shares was transferred on the bourse.

As Top Frontier decided to only partially exercise the option to buy the entire Cojuangco bloc, Ang said the balance was offered to him.

“And I accepted primarily for the following reasons: the San Miguel vision set by management during my term is far from being achieved, and I have a continuing commitment to ECJ (Cojuangco), the company’s stakeholders and the employees to see through the realization of this vision in the near future,” he said.

Top Frontier paid P9.39 billion for the stake it bought and Ang P27.61 billion, for a total of P37 billion.

Jose Mari Lacson, head of research at Campos Lanuza & Co., said the deal would not have any material impact on SMC.

“I think investors are more or less familiar with the role and management style of RSA (Ang). As the most trusted lieutenant, he’s the anointed successor to Mr. Cojuangco in San Miguel. He is the main craftsman and executor of San Miguel’s diversification strategy,” he said.

Ang, who was recruited by Cojuangco into San Miguel, is known to have led SMC’s transformation from a dominant food and beverage firm into one of the largest conglomerates in the Philippines.

The group has spent $3 billion since 2007 for its aggressive acquisitions away from its traditional businesses and into such vital sectors and industries as energy, telecoms, mining, banking, infrastructure, airlines, airports, among others—businesses that the company’s officials expect will bring in revenues amounting to about P1 trillion to the group by 2013.

“RSA’s conversion from employee to minority shareholder clarifies his relationship and incentives to lead SMC to its next stage of corporate evolution. As a shareholder, RSA’s performance as the president would be linked to his pay or wealth. You will have a president that will be properly incentivized to maximize shareholder returns and minimize risks,” Lacson said.

After the Supreme Court upheld earlier this year Cojuangco’s ownership of a significant 20-percent stake in the diversifying conglomerate, the businessman was technically free to sell the shares. The ruling removed the political uncertainty hanging over San Miguel since the 1986  Edsa People Power Revolution. The new post-Marcos government claimed that Cojuangco had acquired SMC shares using funds from the coco levy, a forced tax that the late dictator Ferdinand Marcos imposed on the coconut industry and whose funds were administered by the dictator’s close friend, Cojuangco.

Top Frontier, which had the option to purchase the Cojuangco shares until Nov. 19, 2012, is itself 49-percent owned by SMC as represented by Ang and 51-percent controlled by an investor group that includes businessmen Roberto V. Ongpin and Iñigo Zobel and condiments king Joselito Campos.

Cojuangco’s exit from San Miguel is  seen as part of the business tycoon’s estate planning, similar to the route taken by some American tycoons who cash out their controlling stake in the big companies they had founded in order to distribute proceeds to heirs upon retirement, but at the same time making sure that management would be inherited by people deemed the most fit to continue running the company.

“With Ramon at the helm, I now have the luxury of devoting more time to my personal endeavors, though I will continue to oversee and participate in the unending commitments of SMC to make everyday life a celebration, maintain business excellence, further enhance shareholder value, and become a partner in the country’s growth story,” he said.

One of the country’s oldest corporations, SMC was established in 1890 as La Fabrica de Cerveza de San Miguel.

As of the first quarter of 2012, SMC had about P977 billion in total assets and consolidated sales revenues of P142 billion.

It has joint ventures with several foreign companies, including Japan’s Kirin Brewery, which is a major shareholder of San Miguel Brewery; US-based Hormel Foods Corp., Nihon Yamamura Glass, Fuso Machine and Mold Manufacturing of Japan, and QTel, a telecommunications company in Qatar.

Read Next
Ramon Ang takes full control of San Miguel Corporation
EDITORS' PICK
ICC is everything but a court of ‘white people’
Manila is 78th most expensive city in the world for foreign workers
Garcia softens stance, meets IATF halfway on swab-upon-arrival policy
Want to help local farmers? Shop small and eat Real Food
Piolo Pascual: The Ultimate Heartthrob continues to level up
TeaM Energy pushes development programs to help in pandemic rebound
MOST READ
Sharon Cuneta on living in the US: ‘Nagagawa ko lahat ng normal na bagay’
ICC is everything but a court of ‘white people’
Duterte-Duterte tandem possible but ‘winnability is another question’ — Binay
More than 150,000 voters wiped off the registration list – Comelec
Don't miss out on the latest news and information.